Antioch, CA — Fall Brawl 2018 lived up to it’s name Saturday night at Antioch Speedway.  It was a wild and exciting night of racing.

A memorial lap was led by Promoter John M Soares of Oval Motorsports.  Last Sunday, his wife of 57 years, Donna Soares passed away.  Donna had been with John throughout his racing career.  She ran the track office when Oval Motorsports began promoting Antioch Speedway in 1998. 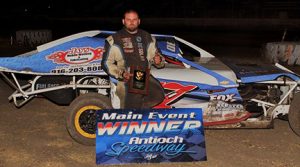 Nick DeCarlo #17 got closer to the A Modified championship with his eighth win of the season. Photo by Paul Gould

After having to make a pit stop to fix some damaged sheet metal on his car, A Modified point leader Nick DeCarlo won his eighth 20 lap Main Event of the season.  Buddy Kniss led the fist two laps before being passed by Kellen Chadwick on the back stretch.  Chadwick’s lead was short lived as he pitted during a lap five caution period, putting Brian Cass into the lead over Bobby Motts Jr.  DeCarlo was already in fourth on lap nine and made an inside pass on Motts for second a lap later.  A Turn 4 move around Cass on lap 12 put DeCarlo into the lead.  Once in front, DeCarlo pulled away for the hard earned victory.  Cass settled for second ahead of Anthony Slaney, Bud Walberg and Dave Duste Jr.

Mike Gustafson won his third 20 lap Limited Late Model Main Event of the season.  Gustafson had the pole for the race and led Mike Walko on the start.  Lapping a slower car in Turn 2, Ryan Cherezian moved around the outside of Walko on lap 11 with Garner following him closely into third.  Moments later a yellow flag flew for Michael Burch in Turn 4.  Gustafson led the restart with Garner moving around Cherzian for second.  Garner tried an inside pass in Turn 2 on the last lap, but Gustafson held him off for the impressive win.  Kimo Oreta made a late move into third as Cherezian and Walko completed the Top 5.  Garner holds a slim two point lead over Oreta heading into the season finale.

Jeff Decker #84 wrapped up his fourth DIRTcar Late Model championship at Antioch Speedway with his seventh win of the season. Photo by Paul Gould

New DIRTcar Late Model champion Jeff Decker won his seventh 20 lap Main Event.  Decker took the lead from Rod Oliver on the second lap and pulled away from there and on a restart later in the race.  Decker won by over a straightaway.  Oliver had a late battle with Mike Hynes, but he held him off for the second place finish.  Kimo Oreta and John M. Soares rounded out the Top 5.

Chris Sieweke won the 20 lap B Modified Main Event.  The race was red flagged before a lap was completed when Nick Caughman Jr. rolled his car out the Turn 1 exit gate.  Jim DiGiovanni led early.  When Anthony Guiliani spun on the front stretch trying to avoid a crash with new champion Trevor Clymens, a major pileup ensued.  After a red flag period to remove cars, DiGiovanni led Phillip Shelby and Sieweke on the restart.  Sieweke made a strong outside pass on the back stretch on lap six to take the lead.  Shelby gained second a lap later.  The lead duo ran closely the rest of the way with Sieweke winning ahead of Shelby, Guiliani, DiGiovanni and Todd Gomez

Chris Sorensen #00 won his fifth Main Event of the season as he clinched his second Dwarf Car championship. Photo by Paul Gould

New Hobby Stock champion Chris Sorensen won his eighth 20 lap Hobby Stock Main Event of the season.  Sorensen charged into the lead on the start ahead of 2017 champion Cameron Swank.  At times, Sorensen led by a straightaway before a yellow flag wiped that out.  Jimmy Brookshire Jr spun from third and made a charge through the pack to get back into the Top 5.  However, Nobody could catch Sorensen as he won ahead of Swank, Brookshire Jr, Josh Leach and Breanna Troen.

Mike Corsaro won his fifth 20 lap Dwarf Car Main Event of the season.  The two time champion raced into the lead at the start with David Rosa in close pursuit.  David Michael Rosa took second from his father on lap seven, but he spun in Turn 4 moments later.  Corsaro continued to lead David Rosa until Rosa spun in the final turn in an effort to make a pass attempt.  Corsaro was the happy winner.  Giovanni Bortoli finished second, followed by Mario Marques, David Rosa and Jesse Pfieffer.

The 2018 season comes to a close with a night of double points racing next Saturday.  A Modifieds will be back along with Limited Late Models, B Modifieds, Hobby Stocks and Dwarf Cars.  For further information, go to www.antiochspeedway.com.

Contra Costa to Lift Masking Requirements in Some...