ANTIOCH – Due to the promoters lack of fulfilling contractual obligations between the Contra Costa Event Park and World Class Entertainment, Event Park Management in the best interest and safety of our facility, event attendees and the City of Antioch have no choice but to cancel the XO Music Festival scheduled to take place at the Event Park July 12 – 15, 2018.

The news was released via Press Release by the Contra Costa Event Park on Wednesday.

According to Joe Brengle, CEO of the Event Park, the contract was signed in December and the rent of $27,600 was paid in full, however, they had insurance issues and did not meet the 9:00 am deadline. They had not filed correctly for a health permit application.

“We get to keep the rent, but do have expenses to cover and we now lose other income we would have made off parking & alcohol,” said Brengle. “We were excited to host the festival and hoped it would come through because its great for the community and hope in the future we can host a similar festival on the facility we just wish everything would have come together for this festival.”

In a statement on their website, the XO Music Festival stated: 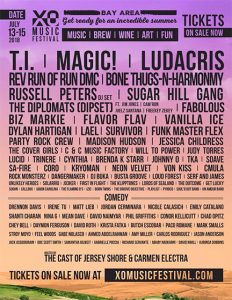 Today we are deeply disappointed to have to announce that due to lower than anticipated ticket sales and in part due to the fact that there were some negative media reports targeting us, with which we strongly disagree. the XO Music Festival scheduled to occur on July 13 will be postponed to another time to be announced at a future date. Despite our best efforts to organize a fun event that would be enjoyed by thousands of people, ticket sales did not reach a level that allows us to proceed with the festival at this time.For months, our employees and agents have worked extremely hard to book artists, promote the festival, create marketing materials, secure vendors and otherwise do the things that are needed to put on a festival of this magnitude. For that, we are deeply thankful.

We also thank those people that have purchased tickets to our festival. You will all be receiving refunds in full through our ticketing agent. Please contact us with any questions. 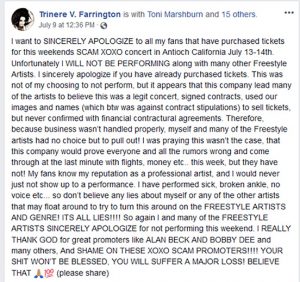 I want to SINCERELY APOLOGIZE to all my fans that have purchased tickets for this weekends SCAM XOXO concert in Antioch California July 13-14th. Unfortunately I WILL NOT BE PERFORMING along with many other Freestyle Artists. I sincerely apologize if you have already purchased tickets. This was not of my choosing to not perform, but it appears that this company lead many of the artists to believe this was a legit concert, signed contracts, used our images and names (which btw was against contract stipulations) to sell tickets, but never confirmed with financial contractural agreements. Therefore, because business wasn’t handled properly, myself and many of the Freestyle artists had no choice but to pull out! I was praying this wasn’t the case, that this company would prove everyone and all the rumors wrong and come through at the last minute with flights, money etc.. this week, but they have not! My fans know my reputation as a professional artist, and I would never just not show up to a performance. I have performed sick, broken ankle, no voice etc… so don’t believe any lies about myself or any of the other artists that may float around to try to turn this around on the FREESTYLE ARTISTS AND GENRE! ITS ALL LIES!!!! So again I and many of the FREESTYLE ARTISTS SINCERELY APOLOGIZE for not performing this weekend. I REALLY THANK GOD for great promoters like ALAN BECK AND BOBBY DEE and many others, And SHAME ON THESE XOXO SCAM PROMOTERS!!!! YOUR SHIT WON’T BE BLESSED, YOU WILL SUFFER A MAJOR LOSS! BELIEVE THAT

Back in February, Fremont Police arrested two men in connection with defrauded numerous landlords resulting in a significant financial loss while damaging properties.

Police say, Mohammed QADIR and/or Habibullah QADIR, each landlord suffered significant financial loss, accumulating to over $120,000 — the two men combined have 45-felony counts against them.

Brengle stated they were not made aware of the “fraud issue” until May but at that time they already had a binding contract and until Wednesday, they had no reason to cancel the event. He also added the fraud issue had no bearing on the cancelling of the contract.

NKF Capital Markets Completes Sale of The Streets of Brentwood

Best for all anyway

“…the two men combined have 45-felony counts against them.” Gee, you think maybe they show do some minimum vetting of the people they do business with?

Im glad they cancelled this shit, its hard to believe the City would allow this with the police shortage we have here. There would have been several shooting and a few deaths, which wouldnt really be an issue, except for the innocent people nearby. Liqour stores and Popeyes would have loved this, but not this time hoodrats!

Thank GOD this event was cancelled! Imagine what kind of ghetto trash it would bring to Antioch, like Antioch needs even more of that? Just look at the list of performers … they call them “artists?????”

I was actually hoping for this and hoping they would purge eachother out after the show. Anytime we can purge ghetto birds out of here, we should embrace it.

Were the performance venues in Oakland not available? Is that why Antioch got the nod? That’s all we need here, more HOOD RATS descending on our city.

C&C Music Factory would have been awesome. T.I. Is a good drummer. I like Ludacris who gives back. I live in Antioch though and would never go out here. This town needs someone with a good head for business. Tickets too expensive for Antioch residents. Carl public transportation is another huge minus.

Problem is this is the county fairgrounds and state property. The city of Antioch has little to no say about what they(county or state) allow go on. That is where the problem lies. The city would have to deal with all the related issues and clean up the mess around the fairgrounds. Glad Antioch PD worked hard to head this off. Seemed shady to begin with.