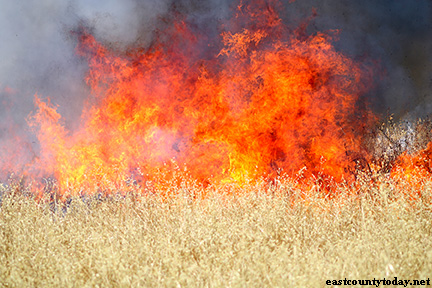 On March 22, Con Fire investigators arrested Emanuel Serrano, 25, a transient, in the vicinity of two vegetation fires burning along Highway Four near Evora and Willow Pass Roads in Bay Point. The two separate fires originated along the walking trail next to westbound Highway 4.

As crews were arriving, a witness pointed out a subject who they had observed starting the fires. Investigators checked the area and observed Serrano running through a nearby field. Searching the area on foot and from above with an Unmanned Aerial Vehicle (UAV), investigators located the suspect hiding in tall vegetation on a nearby hill where he was taken into custody.

Witnesses positively identified Serrano as the individual seen starting the fires. Investigators conducted an “origin and cause” investigation, which did not reveal ignition sources other than human activity in the area of the fires. Serrano was transported to and booked into the Martinez Detention Facility, charged with two counts of Arson of a Structure or Forest Land (PC § 451(c)).

On March 21, a Con Fire investigator responded to an exterior fire burning in brush along the soundwall near Larkspur Drive and Hillcrest Avenue in Antioch. Nearby, Jason Mcgee, 27, a transient living in Antioch, who had been seen in the area of the fire, was identified as a suspect.

During questioning, McGee admitted to lighting this fire and a witness in the area further identified the suspect as having been seen lighting another fire the previous Friday. McGee was subsequently arrested for both fires and transported to the Martinez Detention Facility for booking on two charges of Arson of a Structure or Forest Land (PC § 451(c)).

Con Fire’s Fire Investigation Unit asks residents to help them fight the crime of arson by calling the Arson Tip Line at 1-866-50-ARSON. They caution residents not to hesitate on information that seems too little or unimportant, adding some of the most valuable tips come from residents who were not aware what they saw was very important to the investigation of an incident. Residents can leave a recorded message on the tip line about fire-related criminal activity in English or Spanish. Tips can be anonymous, and all tips are treated confidentially. But investigators sometimes need additional information, so contact information is encouraged.

About Contra Costa County Fire Protection District (Con Fire) — A recognized fire service leader – Con Fire provides fire and emergency medical services to some 625,000 residents in 14 cities and unincorporated areas across our 304 square-mile jurisdiction. And, through our unique ambulance Alliance, we provide EMS and ambulance transport services to much of the remainder of Contra Costa County, California. With few exceptions, county emergency ambulance transport services are provided by Con Fire through its unique sub-contractor Alliance model across the District and beyond to include some 520 square miles of the County. In 2021, the District responded to more than 141,000 incidents of all types, including some 55,000 fire and EMS emergencies, and dispatched nearly 100,000 ambulances, providing expert medical care on more than 75,000 ambulance transports. The District, with 26 fire stations and more than 400 employees, is dedicated to preserving life, property, and the environment.