At 10:51 pm Tuesday, the East Contra Costa Fire Protection District was dispatched to a report of a two vehicle crash in the City of Brentwood.

The crash occurred at John Muir Parkway and Eagle Rock where Engine 52 and Brentwood police located three patients, with one sustaining a head injury.

A medical helicopter was requested where a patient was flown to a local trauma center. Meanwhile, two other patients were transported by ground ambulance including one patient who sustained a dislocated hip.

According to East Contra Costa Fire, alcohol is believed to be a factor in the crash. 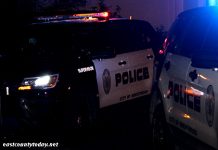