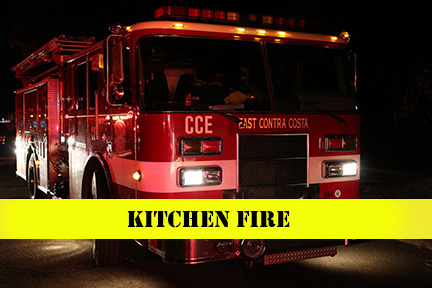 At 5:06 pm Thursday, the East Contra Costa Fire Protection District responded to a report of a stove top fire at a home in the 4600 block of Carnegie Lane in the City of Brentwood.

Upon arrival, flames and smoke were visible with firefighters having a line of sight to the working fire. Engine 52 made fire attack with Engine 59 providing assistance. The fire was in the kitchen and extended into the attic where firefighters were able to have the fire knocked down by 5:16 pm.

According to the District, there was extreme damage to the kitchen area and attic area of the residence. There was also moderate to heavy smoke and water damage throughout the structure.

Battalion Chief Jake Gonzalez said the fire appeared to be accidental in nature due to a malfunction of the stove stop appliance.