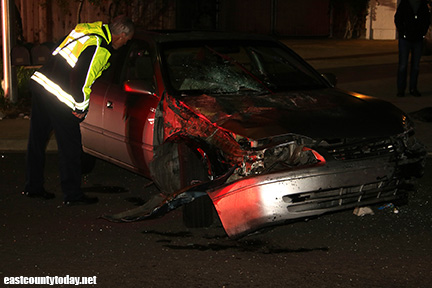 At 9:38 pm Saturday, Contra Costa County firefighters were dispatched to Oakley Road and Viera Ave in the City of Atioch for a report of a vehicle crash that left two teens injured.

According to police, a vehicle is suspected of traveling at a high-rate of speed when it crashed into the back of a parked boat in the 2400 block of Oakley Road. One of the teens was ejected from the vehicle and sustained major injuries. A second teen sustain injuries to his wrist and arm.

The impact from the crash damaged the boat, a vehicle it was hitched to as well as pushed another truck onto the curb while causing major damage.

It is unclear if drugs or alcohol were involved in the crash as police are still investigating and no further information was made available on scene.