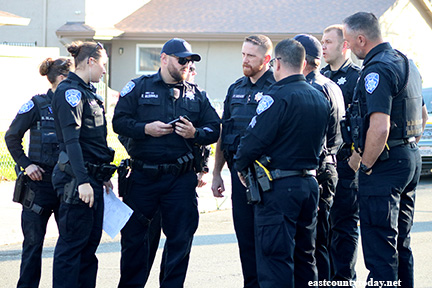 On Thursday, the Antioch Unified School District Board of Trustees continued their meeting after it was twice interrupted Wednesday night by protesters.   After about another hour of public comments, the board entered discussion which they ultimately voted 3-2 in support of adding six school resource officers through a grant applied by the City of Antioch.

Last week, in a 3-2 vote, the Antioch City Council agreed to accept the grant, but with the caveat the Antioch Unified School District pick up 50% of the bill in an amount of approximately $375k over a 3-year period.

The grant is for $750,000 over three years which amounts to $125k per officer position for the duration of the grant, or $41,667 per officer per year. The maximum cost of each officer including salary and benefits is $167,458 per year. The net cost to the city would start at $125,791 per police officer per year. If all six positions were filled, the initial cost would be approximately $754,756 the first year and increasing annually thereafter.

On Thursday,  Crystal Sawyer-White stated as the only African American Trustee, she didn’t see the urgency that during the pandemic they would address this. She asked Chief Tammany Brooks if this would be put on hold if they were still distance learning and were in shelter in place.

Brooks responded, “no, we have a deadline to respond by August 9.”

Sawyer-White asked where these School Resource Officers would work if students were not on campus.

“That is something we would have to talk about with the School District. Some of the ideas include campus security, alarms, site security plans and how they can be improved and also even during distance learning, teachers and staff are going to be having contact with students,” stated Brooks. “So if a student reports some sort of criminal activity maybe occurring in their household, perhaps child abuse, some sort of sexual abuse, maybe having some issue with suicidal thoughts in which an officer would respond to on the campus, a teacher could notify the officer assigned to that school and the officer could respond to their house and respond to that location.”

Sawyer-White suggest other schools were hiring campus monitors in the form of parents of color who students could be comfortable with and relate to them without the gun or intimidation.

Trustee Gary Hack stated he kept track of the public comments and the “yes” for SRO’s was 43 and the “no” were 32 which was split.

“I assume that hiring SRO’s are not a final answer to all these issues. But an absolute resource that we would have available to us and I believe we should utilize it and going through the process of working together to finalize responsibilities that would be mutually beneficial to all of us,” stated Hack noting what they would spend on SRO’s is nearly what they are spending already on security.

Trustee Ellie Householder stated the thing that was “weighing on her heart” after what transpired yesterday and today at the District office was the youth standing up demanding that they make the right decision and to vote no on SRO’s.

“I have personally have never seen anything like this and I was born and raise in Antioch. I think that having the youth come out with this much force and passion, just goes to show how deeply concerning having police officers on our campus is, given the social climate we are in, I just can’t even imagine what it would be like to be one of the young people today and see these videos of officers brutalizing people and then to see an armed officer going and patrolling the halls in between math and English,” stated Householder.

Householder then argued the only evidence provided by Chief Brooks and Superintendent Stephanie Anello was that Brentwood has SRO’s and that they used to have them, but they have not receive a clear answer as to how these SRO’s will directly impact the safety of the students.

She also argued most of their safety issues on campus happened at events, not during the school day and shared data that said students who attend schools with SRO’s feel less safe, decrease in graduation rates, black students and disabilities were 2x more likely to be arrested with all things equal while her research found that there is not a single case of an SRO preventing a school shooting.

“Ideology, philosophy aside, whatever your point of view, we cant afford this,” stated Householder. “We just cut $1.8 million in classified staff including bilingual aids and librarians. So to turn around and then revert some of our funds to hire Antioch Police Department. In my opinion, that is disrespectful to AUSD staff.”

She then called for a comprehensive safety plan in an effort to keep students safe.

Trustee Mary Rocha stated last time they met, everyone was yelling at them saying this was a safety issue and the District was not doing enough and I heard that from our other board members.

“At this time, we have the opportunity to have a federal grant that is coming to us that was processed back in February not knowing that it was going to come to us at this time,” stated Rocha. “Now its in our hands and we have a deadline of August 9. I cannot see us letting it go. They talk about how much money is going to go into it. We already are spending $263k on the security we have. That would pay for four of our policemen. Why not go for the six? I think we need to go for our junior high and high schools”

Rocha then made to a motion to move forward which Gibson-Gray seconded. Rocha’s motion was to approve the SRO grant to accept all six SRO positions.

Board president Trustee Diane Gibson-Gray stated she sent the Superintendent and Chief Brooks and Superintendent Anello and asked them not to answer, but to answer all at once in front of the board.

She asked about the $1.8 million in cuts in the governors May revise and asked if there was an update.  Anello deferred to Assistant Superintendent Jessica Romeo who stated there have been changes since the action by the board.

Gibson-Gray then asked Chief Brooks about community policing model and what the SRO’s would be doing with students on campus through community engagement.

Brooks stating community policing has been a priority of his since he became chief.

“If you follow our social media you will see examples of our officers engaging with our youth. Even on campuses by taking the time to play sports with them, hang out with them during their lunch period, K9 demonstrations and we have even read books with them,” stated Brooks. “All of the feedback we have received from our students, our parents or even from our officers have been extremely positive and so when a school resource officer comes on campus, I’ve heard a lot about enforcement and school to prison pipeline, the vast majority of the work the officers will be doing on campus is building relationships and rapport with the students. They are there to build trust, earn the respect of our youth, be there with compassion and empathy, be there to resolve conflict and be there with resolution skills and just with the hopes of encouraging young men and women who may not have a relationship with law enforcement now, to see that the people who wear these uniforms are just human beings and have feelings and find they have much more in common than they think.”

Gibson-Gray asked about the hiring and who would become a school resource officer. Brooks replied it would be officers they already have and would have to apply for the program.

Householder asked if someone from the District would be involved in the hiring process, including possible a student. Brooks replied he was open to suggestions and finding creative ways to get people involved.

According to Chief Brooks, the MOU with the District and City has to be completed by Sept. 23, 2020.

The board then took a vote with Hack, Rocha and Gibson-Gray in support of up to six SRO’s. Sawyer-White and Householder voted against.

This will now head back to the Antioch City Council for further action.

To the darling protesters…..

That ran rough shot on the board members.

That broke in and vandalized the facilities…

None of those BLM bots are current students. This is what Marxism looks like.

Of course they don’t want law and ORDER. it gets in the way of brooding out more future agitators.

There are no schools in session, so what’s the big deal. Both sides on this are losers.

Householder is so out of touch with the really of our schools. Besides she doesn’t care anyway. The School Board was simply an easy step into elected political with an eye on a bigger prize.

I however love her and Sawyer-White’s attics of asking “hard questions” that actually have no relevance to the issue. It sells to the crowd but is nothing more than smoke and mirrors.

Ellie good luck on your run for City Council. Keep in mind the basic premise of The Peter Principle. You are on your way to the top!