On Tuesday, the City of Antioch recognized four residents who went the “Extra Mile” in community service while working to improve the community.

Mayor Sean Wright called the proclamation something “fun they get to do” because it highlights four people in the community who had done a lot due to November 1 being “Extra Mile Day” for volunteerism and community service. 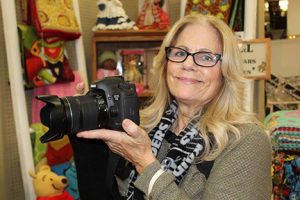 Mayor Wright explained how Beverly Knight with her passion for photography, she launched Empower Antioch Today which highlighted a goodnight Antioch with a “Happy Picture” which celebrates Antioch.

She has also been a volunteer for the concerts by the river with no pay for five years—every photograph is posted on the Arts and Cultural website while also serving on the Parks and Recreation Commission. She also takes time to clean City Park while finding ways to clean up the city.

Knight said she does what she does for the city because she wants to be part of the solution as opposed to just complaining and doing nothing about it.

“I do what I do because I love Antioch. Instead of complaining about problems. It helps me to know I am doing what I can to be part of the solution. With the photography I’m trying to change the perspective. The photos speak for themselves,” said Knight. “We live a beautiful city. As far as being recognized, it’s always nice to know you’re appreciated.” 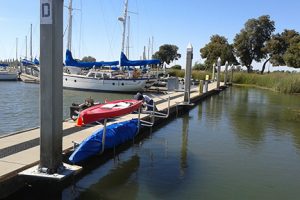 Mayor Wright highlighted how Sandra Kelly has been working at the Antioch Marina dedicating her time to the community noting that due to her efforts, she has helped Antioch gain a site designation for Antioch and the marina on the San Francisco Bay Water Trail.

She also wrote a grant that received $32,000 for two kayak launches for the public to use while starting a grounds beautification project to restore the marina trails. She also assisted with another grant to obtain youth life jackets for free. She also serves on the Parks and Recreation Committee.

“I’m honored to be recognized for my volunteer service, and I’m proud to be one the four volunteers receiving this award at tonight’s council meeting,” stated Kelly. “We’re the tip of the iceberg, with a lot of other volunteers also doing tremendous things to help Antioch. The residents who care and do so much for our city are the reason that I too volunteer. Thank you to everyone who helps make Antioch a better place.” 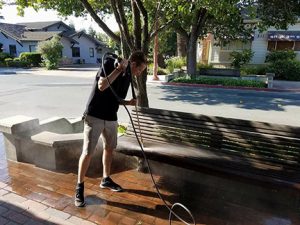 Mayor Wright explained how Michael Pohl as a young entrepreneur in the community, he has a photography business and recently launched a media company. He has utilized his skill as a photographer to assist the Antioch Police Department with their running man video at no cost.

Wright stated this was a wonderful project that highlighted the police department. He has taken photographs and has donated them to the city for their use. He has also given back to Antioch high School to help them with photography, yearbook assistance, and speaks to students about entrepreneurship. He has also volunteered his time by clearing downtown benches, even purchasing his own power washer.

“What were green benches, turned out to be beautiful wood benches underneath after Michael was done,” said Wright. “He has cleaned up benches, sidewalks, worked on weeds and trash. He has worked to repaint curbs. Thank you for going the extra mile.”

Pohl stated he volunteers his time for the city because of a quote my dad always told him.

“If everybody did a little, nobody would have to do a lot,” said Pohl. “If more people would step up and go the extra mile, even if it is just a little, Antioch would be a much greater place. It feels great to be recognized, although I don’t do it for the recognition. I would also like to thank the many citizens who volunteer countless hours, many more then me, by picking up trash, volunteering in schools, etc, and are not recognized. All of us appreciate you.”

Mayor Wright explained how Denise Cantrell should be highlighted with her daughter who go out and pick up garbage around town and work to help make Antioch a cleaner city. 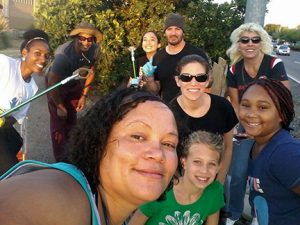 “It’s incredible the amount of bags. They have a direct line to our public works to get as many bags as they want and they fill them constantly,” said Wright. “She has made it her mission to show Antioch residents that we can have a clean community. Sometimes she gets frustrated because sometimes all the cleanup goes unrecognized, but we thank you for what you do.”

Cantrell explained by volunteering, she hopes to see a clean city one day but also explained how she has met so many great people in the process.

“I do what I do for Antioch because I like to see a clean city,” said Cantrell. “I have the time and am able to give back when I can. Everyone should do there part to make their neighborhood and city nice to live in.”

She added while it feels nice to be recognized, there are plenty of other people who have helped her clean up which included Roxanne Cordova, Lucas Chilcote, Kathy Lopez,  the many members of the Cleaning Up Antioch Facebook Group.

Where the community service in the sycamore hood fool

Are you volunteering? That is what it takes. People in the Sycamore area should get out and clean up the mess and it is really bad.

People in the Scumamore area like it that way.

As an APD Volunteer: Let’s not forget the Antioch Police Department Volunteers who volunteer their time 52 weeks per year. On-going commitment, year after year.

check out my community service photo album on fb. i have photos from sycamore area clean ups … mahogany and sycamore etc … i use to live there moved and still went back to help out that area ..

check out my community service photo album on fb. i have photos from sycamore area clean ups … mahogany and sycamore etc … i use to live there moved and still went back to help out that area ..