On Tuesday, Antioch Police Chief Tammany Brooks reported during his hour-long presentation that Part 1 Crime was down by 11.5% when compared to 2018 with 513 fewer incidents with a total of 3,932 incidents.

Brooks addressed the homicides saying of the 7 homicides, two of them were from one incident where it was a domestic violence incident in which two people were killed. One was a dispute and the other four were drug, gang or retaliation related.

In 2018, of the 56 rapes, the statistics show that 87% of the victims of rape stated the responsible was a family member or acquaintance. 4% did not reveal and 9% did not know. He added that of the cases, 16% were delayed reporting by more than a year and did not happen in 2018.

Brooks stated that Part 1 Crime since 2012 are down nearly 32.5% with a total reduction 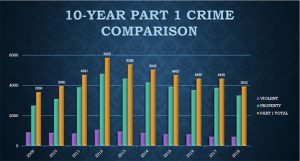 “The violent crime in 2018 is the lowest out of that entire 10 year period. So there is not any other year on that 10 year period that is lower than the amount of violent crime that we had last year,” explained Brooks. “When you look at just the last seven years, however, starting with 2012 which was probably one of the worst crime years that we had here in the city of Antioch, you will see we have had six straight years of reduced crime in the city of Antioch. Every year since 2012 our crime rate has gone down at least a little bit.”

Brooks added that while the numbers are down, crime is still too high.

“I just want to make one thing perfectly clear. In 2012 Antioch was considered in the top 10 most violent cities in the state of California. We are not that any longer. However, even though we see those large numbers of reduction and are violent property in Part 1 Crime, Antioch still has a crime rate is too high for me. I’m sure too high for our residents, and too high for our businesses,” stated Brooks. “However, I still consider the direction that we’re going to be successful. So I’m not saying that we don’t have any crime, I’m just saying that compared to 2012 we have made significant strides in improving the crime picture in our city.”

When it came to residential burglaries, 1 in 4 did not require force which Brooks said meant the home was unlocked when the burglary took place.  He said data showed that a majority of those were garage burglaries. 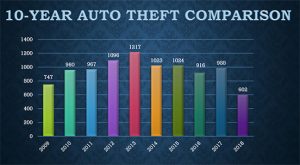 “There was a huge decrease in auto thefts last year. It’s actually the lowest level on that tenure comparison. I would like to tell you that that’s still continuing, but I will say that so far this year we have seen a spike and so we’re not quite sure what the reason for the reduction was last year or what the reason for the spike is this year, but we are currently investigating that,” said Brooks. 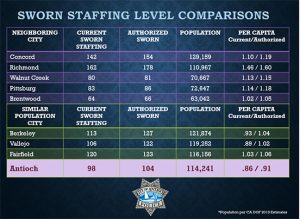 Brooks said Antioch Police are still the lowest per capita staffed police department not only in Contra Costa County, but other cities similar in population size in the Bay Area.

Brooks explained that when the police department was staffed at 126 officers it was at around 7-minutes which is significantly lower than today.

K9 Unit – Fully staffed with 410 deployments resulting in 124 arrests, along with 19 physical apprehensions with 18 demonstrations.

“During these events we run into violent, aggressive, belligerent, uncooperative, sometimes people under the influence of alcohol or drugs, possibly people suffering from mental illness. And obviously our goal is to deescalate and gain compliance without utilizing force. Sometimes that’s not always possible, but you would see that we try and use force, only when necessary. And of the 88,123 calls for service, we went to, we had 84 reportable uses of force, which is one 10th of 1%,” said Brooks. 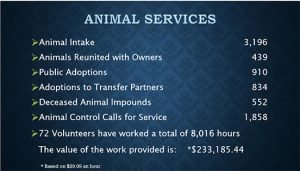 “With four one hundredths of 1%. I think we’re doing a pretty good job and I think it demonstrates our agency is committed to fair and respectful treatment to our citizens,” said Brooks. 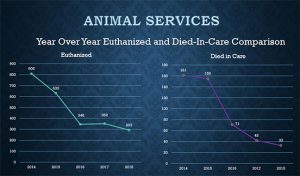 “These are just absolutely staggering numbers that truly demonstrate just the wonderful work that’s going on in our shelter,” said Brooks. He added that they have seen the number of owner surrendered animals drop from 332 in 2017 to 286 in 2018 thanks to their Pet Retention Program where they prevented 2019 owned animal surrenders.

so, less thefts.. more rapes and assaults… seems like a loss , i wouldnt look at this as a win or “things are getting any better”…

An 11 percent reduction is nothing to brag about. Especially if you seperate the property crimes from crimes against people.
Antioch has become a haven for criminals and has a long way to go towards being a safe place to live.
Aggressive and proactive police are the only cure for what has happened to what used to be a nice place to live!

I now have more choices for my carry weapon so yeah I feel safer.

Of course it now seems that fewer crimes are being committed. Let’s say someone has burglarized your house. You call the cops. They don’t show up. Nothing is added to the list of crimes……so, crime is down! That’s a bunch of crap. Crime is actually UP!

Exactly! Frustrated with all of it.

One of the problems is that not all crime is even reported. Police won’t respond on a lot of property crimes; they tell you to file a report on line. Many seniors don’t have a clue as to how to do that (or even have a computer), so they simply don’t report it.