On 11:30 pm Friday, Contra Costa County firefighters responded to a vehicle crash on Highway 4 where a man driving an SUV died after rear ending a fire truck.

The incident happened at eastbound Highway 4 between Loveridge Road and Somersville Road in Antioch where both fire engine 85 and fire truck 84 responded to the scene.

According to Battalion Chief Jim Huntze, Truck 84 responded as a second unit to assist with protecting the scene where they parked behind the accident scene to protect rescue personnel and civilians from approaching traffic.

“The fire district’s policy is to always provide a second unit to freeway incidents for scene protection,” said Huntze. 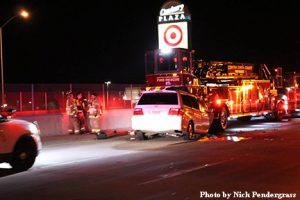 According to the district, during this incident, a motorist struck the rear end of Truck 84 at a high rate of speed; the driver of vehicle was killed on impact, but fortunately personnel were not significantly injured.

CHP stated that the driver was a 47-year-old man from Antioch but did not release the identity. CHP also said that it is unknown if alcohol or drugs wee a factor in this collision.

Truck 84 sustained major damage and three of their personnel were transported to the hospital to be evaluated.

According to the District, the incident was considered a significant incident and the outcome is an unfortunate one, but additional fatalities and serious injuries were prevented.

“Our profession is very dangerous.  The Captains and crews of Engine 85 and Truck 84 did an excellent job of protecting this accident scene.  The training and professionalism of our personnel directly contributed to reducing the impact of this incident,” said Huntze.

County Office of Education Announces the Death of Former Superintendent

apnea can be treated so many people have it undiagnosed and we can help. TMJ Sleep Therapy centre of SF.

Way to advertise on a tragedy, you capitalistic swine, Veronica.

what a horrible thing to say- firefighters are here to save lives ! It is very sad that someone died – bit still compassion is something we need . Shame on you !

To the Hudson Family,
My deepest condolences to each and everyone of you and all of his friends. Such a major loss. I had the pleasure to call your beloved my friend. He was true and pure man with a heart of love wrapped in gold. He loved God, his family and friends. I will never forget and will always cherish is warming personality.
Ramona P.

Learn to use the brake pedal.

Stop endangering the lives of others.

Our world SMH, if the shoe was on the other foot and the firefighters had killed thief selves and a citizen was hit but lived in this accident the comment would be different..I FEEL SORRY FOR THE PEOPLES THAT THINKS ITS OKAY TO TALK ABOUT A PERSON NEGATIVELY AFTER DEATH. MY GOD REST HIS SOUL!!

Hudson Family,
I had the honor to work with Delano. He was a hard worker who took pride in his craft. He too had a dangerous job making sure the public was safe during electric emergencies. Safety was paramount to him; I know this had to be a tragic accident that he would have avoided if possible. May God give your family peace and understanding during this difficult time.

It’s great he didn’t kill anyone else.