Antioch City Manager to Retire at End of 2021 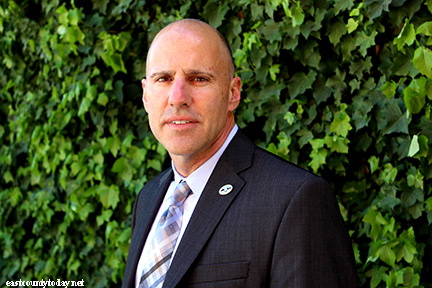 ANTIOCH, CA – Antioch City Manager Ron Bernal has announced the intent to retire at the close of 2021, ending a thirty-six (36) year career in public service.

“I’m living proof that opportunity lives in Antioch. I’m proud to call Antioch my home and want to see it continue to be a place where everyone can live a life of purpose and opportunity in peace, safety and community,” stated Ron Bernal.   Mr. Bernal shared his plans with the organization late last week, noting “if I could do it all over again, I’d choose Antioch.”

Mayor Lamar A. Thorpe commented, “Ron is an impeccable human being, filled with compassion, understanding, and love. This has been demonstrated time after time in his relentless support and desire to house our unhoused neighbors, provide Antioch youth with new paths filled with opportunity, and much, much more.  Ron has been a friend, confidant, and advisor.  While Ron will be missed in his capacity as city manager, he and his wife will continue to be Antioch residents and neighbors to many of us.”

The Antioch City Council will consider its transition plans in the coming weeks.

Bernal was named city manager in March of 2017 after serving as city manager on an interim basis after Steve Duran was let go.

I would retire too with this incompetent city council and Mayor.

He robbed Antioch dry with his ridiculously high salary and what did he accomplish? Nothing! Just some paper shuffling. Couldn’t make it in private industry! The safety here is non existent and no one wants to open businesses here and who can blame them?

Why doesn’t he leave right now? Why wait until the end of the year? I doubt anyone will miss him!

This guy just didn’t pay attention to what was going on! He should have kicked out Tamisha Torres-Walker the day after the November election as she was not allowed to run for any public office due to her arson activities. I hope the so-called city attorney also leaves because that’s another one who DID NOT DO HIS JOB! He probably doesn’t have the brains to make it in private practice, so he mooches off the city.

It sickens me what has become of this once nice city! It’s become a ghetto sewer rat city now! Oakland II .. Shame!

The city manager does not have the authority to “kick out” a council member nor does he/she decide who is “allowed” to run for elective office. You misunderstand.

If the City Manager and the City Attorney cannot remove that woman from the City Council because she was not legally permitted to run for that position, then who can do it? She kept her criminal record from the voting public. Luckily, she does not represent my district and her decisions should be ignored and stricken from the records.

Antioch is reaching a crossroad of no turning back. If good leaders aren’t elected very soon, the City will dive into the eternal shithole abyss.

ROBERT C .. You must be joking! Inform yourself! Torres_Walker committed ARSON and was jailed for it! No one with that record is PERMITTED to run for public office, ever, in California (and maybe elsewhere). Even if her record was expunged, she still was not allowed to run. She was “elected” illegally and it was the job of the City Manager, the Legal Counsel and the mayor to kick her ass out!

Both this city manager and the city attorney are as useful as a fart-in-a-windstorm. The CA should join Bernal and depart with him. Maybe the next one will have some balls!

Why are people who are hired and turn out to be totally useless, continue to remain in their positions? Those who work for the feds, states, counties and cities should be dealt with just like those in private industry. If they don’t work out, they should be let go. What idiots established the police that just because you work in the civic realm, your job is secure from firings? This needs to end!

ROBert C! You can’t be this DENSE! The woman, a convicted arsonist, is NOT allowed to run for office in the first place! Is that too difficult for you to grasp? If she does this while covering up her past, then she has to be REMOVED! It is up to the people who run the city to do that . . and in this case, it is the City Manager and the City Attorney who should KNOW THE LAW! What in the world is the matter with these two clowns?