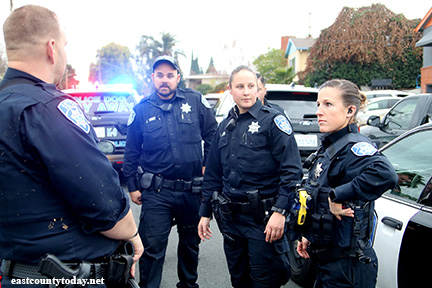 According to the staff report, it is anticipated the salaries paid during this current fiscal year would come from existing salary saving from unfilled positions. Future years would have to be approved through budget appropriations.

“As I stand here today, I have no more conditional job offers to give to anyone else in our process now,” said Police Chief Tammany Brooks. “That was the good news. The bad news is as I look ahead in the future, I know that we as a police department have anywhere between three and six people separating from employment due to medical service retirements within the next 12 months.”

Brooks said between 2014-2019, they have had three to four separations each year that were unexpected and another 3-6 who are anticipated separations. Since Measure C was approved by voters in 2013, 82 officers have been hired, while 52 have separated which is a net gain of 30 police officers.

The typical turnaround time for candidates applying for a police officers or police trainee position to complete the hiring process is 3-6 months. Current police academies run another 6-months. Currently, a best-case scenario to fill a vacancy is 4-months and worst-case is close to 12-months.

Councilwoman Monica Wilson asked since there have been a couple times they have been asked to overhire, if they have a policy to allow the Chief to overhire to maintain the hire amount instead of always going before the council.

Chief Brooks said he was aware of both the City of Brentwood and City of Walnut Creek who have an overhire policy in an effort to maintain their authorized staffing levels.

City Manager Ron Bernal said the council can provide direction on a policy that would require the item to come back and ask for permission to maintain an overhire policy.

Councilmember Lamar Thorpe agreed saying it “should be a standard practice” and would also include code enforcement.

Mayor Sean Wright thanked Chief Brooks saying the police department have been doing a phenomenal job noting they are moving towards a 1-officer per 1,000 residents’ ratio.

“This is necessary, whatever number your trying to hire too. I have always said we’re not going to get to that number. Not because you don’t try but because of attrition, because of retirement,” explained Wright. “This is the only way that we actually get to the number that we’ve allotted to you. So thank you for coming with this request.

The council then approved the authorization of hiring six additional officers through the overhire process in a 5-0 vote.