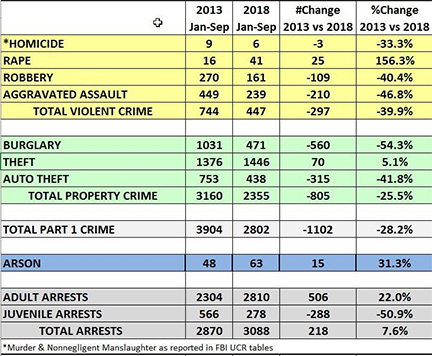 Lately, I have had a number of people ask me about crime statistics in Antioch. More specifically, they want to know how our current crime rate compares to the crime rate prior to Measure C being approved by voters back in November 2013. Attached to this post is a graph comparing Antioch’s Part I crimes for the first nine months of 2013 to the first nine months of this year.

Pretty staggering results! Overall, violent crime is down 39.9% and property crime is down 25.5%, resulting in a Total Part I Crime reduction of 28.2%.

This data clearly shows that Antioch is a safer community than it was five years ago. Now, by no means am I saying Antioch is crime-free, or even as safe as we would like it to be. It’s not. However, we have made great strides over the last five years in making our city safer. But like many things that happen over a period of time, the results aren’t as obvious to those of us who live here and are acclimated to the environment we see every day.

I’d like to share a personal story as an analogy to this. About 13 years ago, I weighed 320 pounds. I made some eating and lifestyle changes, and eventually lost over 100 pounds. This was very difficult for me to do and took more than a year to accomplish. The sad part about this was while I was losing weight, I continually felt as though my physical appearance was not changing. I saw myself every day, picking apart every flaw, and continually feeling as though I was making very little (if any) progress. It was not until I saw a picture of myself at my heaviest, and compared it to a more recent picture, that I was able to appreciate the change I had made.

Some people have a preconceived notion about Antioch. And for them, every single incident of crime reported helps justify their opinion. Also known as confirmation bias, this is the mentality of someone who fails to see the forest for the trees. Antioch previously had the unfortunate distinction of being one of the most dangerous cities in California. That is no longer the case. In fact, the most recent list I saw (just published last week) had Antioch down to # 51 (https://www.roadsnacks.net/most-dangerous-cities-in-califo…/). By no means is this perfect or even ideal. But it’s a marked improvement from where we were.

There is still a lot of work needed to make Antioch safer. But the men and women of the Antioch Police Department have been, and are still, committed to doing the best we can with the staffing and resources we have to improve the safety of our community. I believe the funding generated by Measure C has enabled the Antioch Police Department to make a measurable impact on the crime in our city over the past five years. Measure W, on this November’s ballot, is intended to continue providing the Department funding that could be used for programs and staffing to further reduce crime in our community.

As your Chief of Police, and an Antioch resident, I am truly thankful for everything and everyone working to keep our community safer!

**The increase in Rape crimes was a direct result of the Department of Justice expanding the definition of that crime, which took effect January 2014.

Updated: Bay Point Residents Given “All Clear” to Return Home

Great, no need to support Measure W then if all is well and things are better. They really don’t need that extra funding. Keep Measure C at 1/2 cent and lets go another 7 years.

Just in time got get fools to vote for Measure W.

If it’s only safety we want improved in Antioch then measure C is working. If there is more we want to improve in Antioch while we continue to improve safety, Measure W is our answer. Fixing your bathroom is nice but, if your kitchen gets neglected you probably still want a “new house”. Let’s fix our kitchen as well!!

I appreciate the Antioch Police Department, and neighboring departments, for all they do to help make our community a safer place to live.

I’m voting no on W because I like things exactly like they are! I like being able to drive around drunk without worrying about being pulled over. No on W! We don’t need more cops, we already have too many!!

To all the hard working police officers who care, Thank You. Lets continue too work hard and fight crime. However lets not let Fantasy crime stats. Suggest everything is ok. There is a lot more work to be done.

Shootings across the City. Crime in Nice neighborhoods where crime was non existent once. Shooting in front of Lone Tree Elementary; all suggested crime as a whole and crime is still very bad in Antioch.

If you believe taxing yourself into oblivion with Measure W is a successful strategy, keep drinking the Democratic koolaid!!!

Antioch has been taxing and taxing it’s residents for over 15 years to improve the quality of life and it is still the most dangerous city in east county!!

Have you ever asked yourself why cities like Brentwood, Discovery Bay, Oakley, and even Pittsburg have thrived and Antioch remains the “toilet” of East Contra Costa County? It’s because it’s the most poorly managed city in the Delta region. You people keep electing and re-electing individuals who believe throwing more and more taxpayer money at a problem is the one and only solution and that liberal way of thinking has and continues to fail over and over.

Your problem is you have LAZY citizens who whine and complain but don’t have the courage or will to organize and fight for the safety of your neighbors, neighborhoods, and the community at large. You complain to City Council but you don’t hold their feet to the fire ? when they fail to listen to and address your concerns. You let them off the hook time and time again by giving in to their begging for more taxpayer money and what do you get in return? Nothing but excuses and broken promises. It’s called being a SUCKER!!!!

The quarterly Quality of Life forums years ago forced the Council to report back to the residents what actions were being taken to address community concerns and when promises weren’t being kept we gave them HELL for it!!!!

I did my part, now it’s your turn. If you want Antioch to improve get off your butts, stop hiding anonymously behind your keyboards and personally let your elected officials know that they are responsible for the destruction of your city. Or if you prefer to keep complaining and depending on someone else to get involved and do the work that ALL of you should be doing together, enjoy being the toilet paper of Antioch politicians because you have earned it!