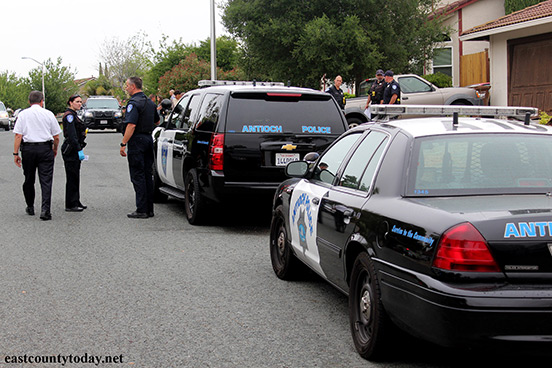 The Antioch Police Department are investigating an “accidental death” of a 15-year-old Antioch resident that occurred at 9:55 am Thursday in the 4300 block of Palomar Drive in Antioch.

According to Antioch Police Sergeant John Fortner, they were told the 15-year-old subject was accidentally shot with a BB gun by another 15-year-old. Both the victim and suspect are Antioch residents.

Fortner explained once at the scene, officers located a15-year-old male victim, who was on the ground with what appeared to be a small wound to his chest. The victim was unresponsive and first-aid/life saving measures were started.

The victim was transported to a local area hospital where he ultimately succumbed to his injury.

“During the investigation, it was learned that the juvenile victim was shot with a pellet rifle once in the chest, by a juvenile, male friend. At this time, based on several witness statements and evidence located at the scene, the incident appears to be a tragic accident,” said Fortner.

All of the parties at the scene are cooperating with the investigation which is ongoing.

Wow. How sad and tragic.

Very sad.. prayers to the boys and their families of all involved.

Our hearts are with the families involed tonight. Accidents do not just happen.

However sad, this is still a negligent shooting. They were not taught, and/or did not follow Firearm Safety Laws

Let’s not sling mud at the parents. Or ebate whether or not they were taught gun safety. Parents are going through enough, don’t you think? As kids we all had BB guns and nothing ever happened. It has nothing to do with poor parenting or bad kids. Things just happen.The wrong angle, one too many pumps, too close. Just kids having fun. We need to pray for the friends and family, not publicly shame them.

This is a terrible tragedy and of course we sympathize, but what is the role of a parent? Their PRIMARY role is to create an environment which is safe for their children! This means knowing what kind of “toys” the kid has and what he does with them. Who bought him or gave him that pellet gun? Why does one even NEED a pellet gun? What is that used for? I come from a family with 8 kids and we were FORBIDDEN to own or play with BB guns or anything with potentially dangerous outcomes! My parents almost got into an altercation with some parents who let their kids use BB guns to shoot at birds in a park. By the way, why weren’t these boys in school?

Maternal mortality rates are higher in the US than any developed country so your parents were playing with fire.

955am on a Thursday most of us are at wk. School is out and they are 15. Jus a very stupid decision…teenage boys being teenage boys. Don’t be so quick to blame the parents all the time.

It was reported that there was a delay of 15 minutes in calling for help because these youths didn’t know what to do. They should get in trouble for not calling 911 immediately and why do they have access to pellet guns. Sheesh. Lameness to the umpteeneth degree.