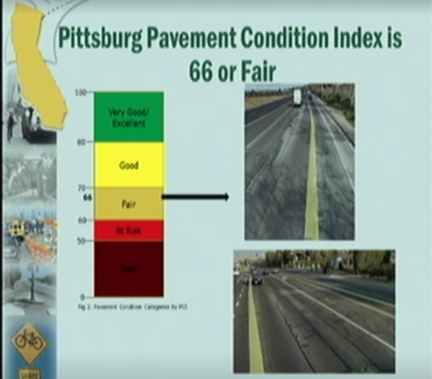 On Monday the Pittsburg City Council received a report by City Engineer Richard Abono on SB1 and how its been assisting the city on road improvements and maintenance.

With Proposition 6 on the ballot this November, Abono stated his report was for information purposes only to city leadership, not to be political in anyway.

According to the report, California has a combined need of $131 billion in roadway repairs just to bring the street and road system into good and safe conditions.  SB1 will bring in $5.1 billion per year for the next 10-years.

The report stated Pittsburg roads were ranked as “fair” with a score of 66 out of 100 which is below 20 other cities and unincorporated areas of Contra Costa County.

“For Pittsburg to maintain the fair category, a budget of $4.4 million would be required per year for paving and road maintenance. The current budget for road repair and maintenance is only about $3.6 million per year,” said Abono. “If SB1 is repealed the city’s paving budget would fall to 2.5 million which is insufficient from stopping our roads from slipping and go from fair to poor condition by 2025.”

The report also stated that 1 out of 4 roads in Pittsburg is categorized as “poor” and there is a $69.2 million in deferred maintenance backlogged that needs to be performed to get all roads into the “good category”.

Of the $5.1 billion the state collects from SB-1, $1.2 million goes to the City of Pittburg where the money can only be used for local roads or streets and is not placed in the general fund—but a special account.

The report also stated that SB-1 costs residents $117 per year, however, the estimated costs of poor roads can cost residents more than $978 in vehicle repairs each year.

As of Monday, it was reported more than 6,581 projects across California are underway with 1,302 are in the Bay Area Region.

Abono explained that upcoming projects in Pittsburg include road repairs on Loveridge Road between SR4 and SR4—the city received more than $300,000 in funds just for this project. A repair project (paving) is going out to bid on W Leland Road from Woodhill Road to Bailey Road which is anticipated to begin this fall ($1.2 million in SB-1 funds).

According to Abono, should Proposition 6 Pass, several projects would be delayed until funding becomes available as the road and repair budget would immediately be cut by 30%.

“I am not here to be political in any way, but to inform city leaders and residents know the facts,” said Abono. “Without SB-1 gas tax, a drastically reduced road maintenance would severely hamper the city’s ability to improve our roads, but the long range effects would see our streets deteriorate from today’s rating of fair to poor within the next 7-years.”

Pittsburg Unified to Use “Air Quality Day” on...

For decades and decades, we have been paying high gasoline taxes which were to be used for road construction EXCUSIVELY! Suddenly, that money disappeared and now the state is MOOCHING from us all over again WHAT HAPPENED TO THE MONEY WE ALREADY PAID IN TO HAVE THE ROADS REPAIRED? Today, California, which used to have THE BEST roads ever, now has broken down pavement and potholes the likes we have never seen before! WHERE IS THAT MONEY THEY TOOK FROM US IN TAXES for over 40-50 years????