Man Barricades Himself in Vehicle After Police Chase Ends in Antioch 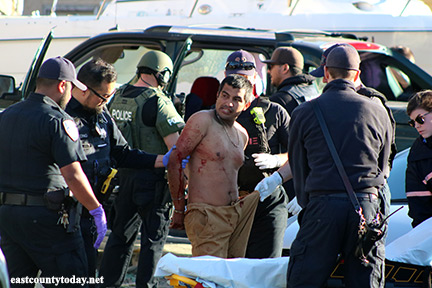 A man wanted by Oakland Police for a carjacking led police on a 100-mph car chase through two counties and ended up in the City of Antioch.

The pursuit ended on Elkhorn Drive Way off Deerfield Drive in Antioch after the driver of the vehicle ended up in a driveway and barricaded himself in the vehicle for more than an hour. 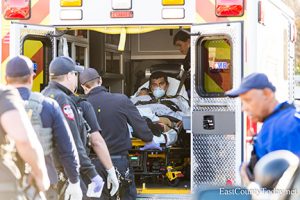 At approximately 4 p.m. SWAT officers fired tear gas rounds into the car prior to police moving in with the use of a K-9.

The suspect was taken into custody just before 4:15 pm.

Reports that the man was armed with a knife and possibly driving while under the influence could not be immediately confirmed.

No further information was released on scene. 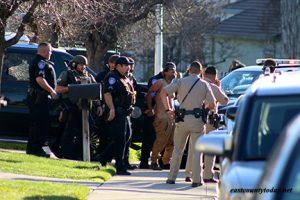 On February 11, 2018, at approximately 2:36 pm, CHP officers notified Antioch Police Dispatch they were in pursuit of an armed carjacking vehicle out of Oakland on the city streets of Antioch. The pursuit came to an end when the suspect pulled into the driveway of a residence in the 4500 block of Elkhorn Way.

The suspect would not exit the vehicle and did not comply with commands given by officers on scene. Less lethal rounds were fired into vehicle and an Antioch PD canine was deployed. The suspect was taken into custody without further incident. There were no injuries to officers or residents in the area. 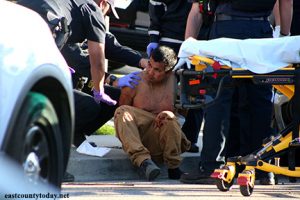 Oakland PD came to the scene and took over the investigation.

Anyone who may have witnessed the incident is encouraged to contact the Oakland Police Department. You may also text a tip to 274637 (CRIMES) using key word ANTIOCH.

Earlier OPD was involved in a vehicle pursuit in connection with several crimes. CHP took over the pursuit which ended in Antioch. Ultimately the suspect was taken into custody. The Oakland Police Department appreciates the assistance of Antioch PD&CHP.

Another POS – risking innocent lives for nothing.

damn i just saw this happen

U pos m f er We r tired of trash like u exploiting our city streets. take it back to where u came from and stay out!

Better have that K9 checked for rabies

Good doggie! Good doogie! I hope his handlers gave him a steak for his great work! Isn’t it strange that no matter where they are from, they almost always wind up in Antioch! Why is that?

Why has Antioch become the shithole of the Bay Area. What happened to a nice city? Another great job by The officers on scene. Can we start a go fund me for a nice steak for the K9 cop.

Antioch has never been a nice city. It was a crap hole in the 60s and 70s, just like Pittsburg. It has gotten worse.

My great grandparents have lived in Antioch since the early 1950’s and say it was OK until criminals started living here in the late 1960’s. Pittsburg was bad but it got it’s act together (sort of), while Antioch went down-the-tubes mainly because of very poor city management.

Looks like the K9 got his teeth into this piece of trash! I hope the dog doesn’t get sick! Who knows what this moron had inside his system!

Why not wait until facts come out until you start making assumptions about someone’s status based on their look?. We already have enough hatred being spewed every day – contributing to it doesn’t help our country come together.

We do make assumptions about someone’s status based on their looks and people with those “looks” are the ones to blame. If they followed our immigration laws, we would not assume things. They brought it on themselves and are ruining it for those who may have gotten here legally but still maintain the same “look.”

You really want to “come together” with this trash? Get real!

And he just started to straighten up his life. Now everyone else ruined it.

My family has been in Antioch since 1905 and it was a wonderful small town to grow up in during the 60’s and 70’s. It started really going down hill in the last 10-15 yrs. Too much growth, too fast!!

Moved to Antioch in 1989. Property was robbed the first day. A wheelchair bound drug dealer a few doors down. And my vehicle vandalized a few times the firs year. And I was told the nearby school had the best teachers and school scores. Yea, Antioch has been a %**$$hole at least since then. Now it is unbelievably bad!