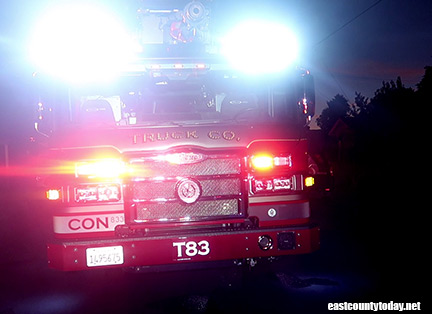 Just before 5:00 am Thursday, Contra Costa County Fire Protection District firefighters responded to a report of a house fire in the 600 block of School Street in the City of Pittsburg.

The original report came in at 4:56 am with a report of a home on fire along with a vehicle in the driveway. Upon arrival, T84 crew confirmed heavy smoke and flames coming from the home. A short time later, there was a roof collapse to a portion of the home.

This is a known hoarder house per firefighters.

Pittsburg Police Department officers were also on scene providing traffic control and working on evacuations in the area.

As of 5:14 am, Battaltion 8 reported the fire was knocked down and crews would remain on scene for extensive mop up.

As of 5:15 am, its unknown if any occupants were inside the home or if anyone was injured.