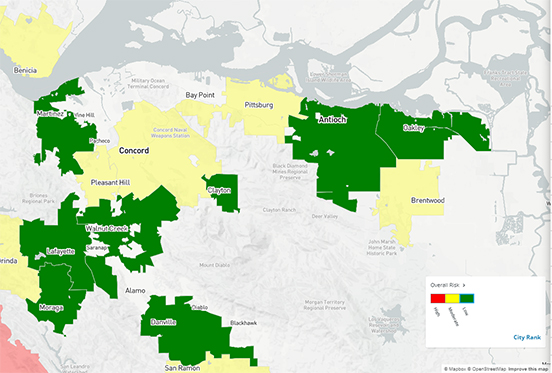 The following was a Press Release that was issued by the City of Antioch who says they have ranked from high risk to low risk according to the States Auditors Office Local Government High Risk Dashboard.

A couple of things to consider in this ranking:

It was also in June of 2019 during the 2-year budget cycle when that revenue since 2012 has grown nearly 70% while discussing whether or not to hire more police officers, that concerns over deficit spending as early as 2021-22 and within 5-years could be $12.56 million in deficit spending.

Below is the Press Release issued Monday:

ANTIOCH, Calif., Nov. 18, 2019 /PRNewswire/ — Today, the City of Antioch announced that they have been ranked green by the California State Auditor’s Office.

According to the State Auditor’s Office Local Government High Risk Dashboard, cities are ranked in order of financial risk – from high risk to low risk. Rankings are based on the number of points each city earned; cities with equivalent scores have the same ranking. Additionally, the color red is considered high risk, yellow is considered moderate risk, and green is considered low risk.

“Antioch residents have always known that we are a great community to raise a family, grow a business, and recreate,” said Sean Wright, Mayor, City of Antioch. “With the support of our community, my colleagues and I have worked hard to continue making Antioch a place people want to call home.”

With a change in leadership at both the City Council and City Manager’s level, city officials quickly went to work focused on getting the City on a trajectory that would allow Antioch to ensure that its residents would enjoy a positive quality of life.

“Our ranking is a testament to the hard work and dedication of our team members,” said Ron Bernal, City Manager, City of Antioch. “I would like to thank our team, and the residents of our community for trusting our process and believing that we can turn our fiscal position around. It is truly an honor to serve this amazing city.”

About the City of Antioch: Antioch is located on the banks of the San Joaquin River in Northern California. Just off of Highway 4, in Contra Costa County.

With a population of over 100,000 people, Antioch has become the heart of Eastern Contra Costa County, offering a variety of employment, shopping and vast recreational activities.

The pace of development in Antioch has spurred activity for financial and insurance institutions, contractors, and other types of service-oriented businesses. Increased development has created increased employment in schools, hospitals and other local service sectors. Antioch poised to capitalize on our location, skilled workforce and fiscal strength.