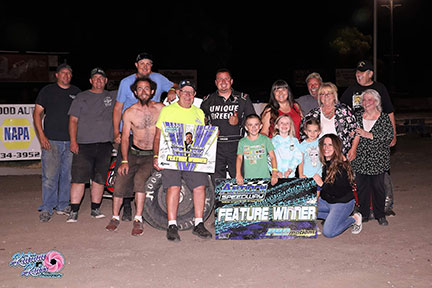 Antioch, CA — Shawn Ariana won the 33 lap Wingless Spec Sprint Main Event Saturday night at Antioch Speedway. This was the Sonny Calkins Memorial and it paid $2,500 to the past Winged 360 Sprint Car champion. It was also the biggest win of Arriaga’s career, and it came aboard the Dave Johnson owned entry.

Jacob Tuttle took the early lead ahead of Arriaga. Daniel Whitley was an early third. It became a close four-car battle up front as DJ Johnson ran in fourth during the first half of the race. A low pass in Turn 2 of the 10th lap gained Arriaga the lead with Whitley moving into second. A low pass in Turn 4 on Lap 15 regained Arriaga the lead, and a yellow flag on Lap 17 saw the end of a Top 5 run for Bob Newberry. Johnson moved into third on Lap 18 and slipped past Whitley for second on Lap 19. Tuttle followed Johnson into the third position. At that point, Arriaga hit cruise control and led the rest of the way by about half a straightaway over Johnson, who settled for second. Tuttle ended up third, followed by Whitley and Dylan Newberry.

Grayson Baca won his first 20 lap Pacific Coast General Engineering Hobby Stock Main Event. Chad Ragsdale spun in front of the pack in Turn 3 to cause a complete restart. Baca led the pack to the next green flag with Chris Long in second. During the early stages, Baca pulled away, leaving Long and Brad Coelho to fight fiercely for second. Baca caught slower traffic by Lap 9, but he always seemed to make the right moves to keep a straightaway advantage over Long. Michaela Taylor spun in Turn 3 for a Lap 14 yellow flag. Baca led Long and Coelho on the restart. One more yellow flag on Lap 17 did nothing to slow Baca, but this time Long presented a bit of a challenge. Baca still kept his cool under pressure and held off Long for the win. Coelho settled for third, followed by Jared Baugh and point leader Misty Welborn.

Blake Bower won the 20 lap WMR Midget Main Event. This was the second win of the weekend for him and his fifth win this season. He is the reigning series champion as well as the reigning USAC Western States Midgets champion. Bryant Bell took the early lead over Shawn Arriaga. Bower made it a close three-car battle in the early going. Bower slipped past Arriaga on Lap 4 and made a Turn 4 pass on Lap 12 to take the lead from Bell. Bower built about a half-straightaway advantage over Bell in victory. Arriaga settled for third, followed by Cory Brown and Todd Hawse.

Tom Brown won his second 15 lap Mini Stock Main Event. Brown was actually caught up in an early race tangle before a lap was completed, but he was already second behind Dana Gardner when the first official lap was scored. When Gardner spun in Turn 3 on Lap 2, Brown gained the lead over Eddie Humphrey III. The lead duo ran that way to the checkered flag with Brown winning by nearly a straightaway. Ryan Graham had third on a Lap 11 restart, but he surrendered the position to Don Abitz on Lap 14. Graham settled for fourth ahead of David Carson.

Racing resumes next Saturday night with the Xtreme Scaffolding Limited Late Model Series back in action along with the Wingless Spec Sprints, Delta Dwarf Cars and BCRA Lightning Sprints. For further information, go to www.antiochspeedway.com.

WTF California: Antioch Police Fails to Communicate, Gas at $5 Nationally and Stay Away from Peoples Homes