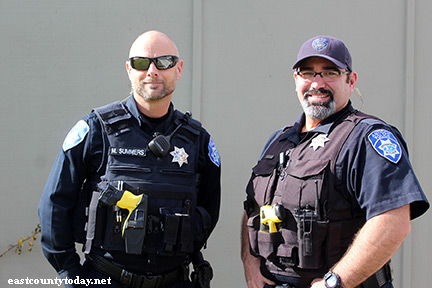 The Antioch Police Department has launched a Community Engagement Team where two officers are working to address quality of life issues within the City of Antioch.

According to Antioch Police Chief Allan Cantando, they are working to address homeless issues by helping get those who want help, some help, but also deal with blight, shopping cart issues, littering, and sleeping on private property.

“It’s about taking a different approach in dealing with our homeless other than only giving a ticket,” says Cantando. “These officers are working with not only code enforcement, but county health services.”

Officers Aiello and Summers were selected after showing an interest in the program. Cantando says during oral boards, they wanted to select officers who have a great deal of experience within the Department, strong communicators and were problem solvers.

Cantando says he looked into launching this program for some time, but did not have the staffing. Over the past year, issues with the homeless kept coming up from members of the community and finally was able to take action based on actions by the previous council six-months ago.

The officers work day shift and are able to clear from the position should a higher-priority call come in and they are needed.

Cantando says it provides them with more officers on the street while addressing a real need to residents of the community who have let it be known homelessness is an issue in the city.

“I looked at it a couple ways the biggest complaints which are traffic and homeless quality of life issues. By having officers out there they are dealing with those issues, in a hot incident, they can stop and assist on higher priority calls for service,” explained Cantando. “They are not dispatched to calls for service, they are out there to be proactive, but they are available to respond. They could also be assigned to more challenging areas or crime suppression details. They could also be assigned to work the Sycamore Corridor or work on stolen vehicle recoveries. Working with homeless is just one aspect to the duty.”

He was quick to point out the public may not see a difference right away, but over several months they will likely see less issues—but he reminds the public being homeless is not a crime.

“I am not sure if people are going to immediately notice a difference, a lot of it is complaint driven regarding camps. In the next couple months our goal is to make people see there is not as much homeless, litter, or shopping carts because we are trying to get these people help,” explained Cantando.

In fact, in two weeks since the launch of the program, Antioch Police reported more than 100 shopping carts have been recovered from individuals who were actively using them (not abandoned carts). The carts were then returned to the local businesses. Meanwhile, the people using the carts were given bags for their possessions.

When asked if the goal was to make it as uncomfortable as possible on homeless to force them out, Cantando says that was not the goal.

“We are not trying to make it uncomfortable, but these are individuals occupying our streets, on private property, on city property in hours they shouldn’t be, we are addressing those things with the understanding many of these individuals need service such as medical and shelter,” explained Cantando. “If there is a criminal violation our officers will address that.”

For those who keep intentionally violating the laws, after a certain amount of tickets they will be taken to jail provided there are criminal violations. The goal is the see if police can find ways to offer services to get them the help they need.

“We are making progress with panhandlers,” says Cantando. “This is a work in progress but the results are promising and we are seeing the results already.”

Officer Aiello agreed with Cantando by explaining how they really are out there trying to see if they can get people assistance and in touch with county or non-profit services. He called it a different pace than what he is used to, but says its rewarding because they are really helping people and cleaning up the streets.

“I’ve had more contact with homeless in the past two weeks than I have in the last 5-years,” said “Aiello. “It feels good to make a difference for people who may not have known services were even available or had a way to travel to Pittsburg or Martinez for services.”

Officer Summers noted the concept is already working and showing results for people who want help.

He explained in one example, they had a man who would panhandle every day off Highway 4 and after multiple tickets they asked him if he was eligible for benefits and he said yes but did not have a ride.

“We got him a ride through the church and he now has benefits and I have not seen him out panhandling for a while,” said Summers. “These are the rewarding calls where we are able to help people who want to help themselves but don’t have a way of doing it, such as a ride to Martinez.”

Aiello and Summers highlighted while working this beat, they have realized just how few options there are for mental health services in East Contra Costa County as well as veterans services and other services that may otherwise be available in other parts of the county but not directly in East Contra Costa meaning people with no means of transportation can’t receive county services even if eligible.

Aiello noted that a lot of times, if they only had certain paperwork in their vehicles or a county worker with them on patrol, they could provide much more immediate help.

Cantando says the officers will continue to work with the County Mental Health Evaluation Team (MHET) on providing services to homeless within the City of Antioch and that as they work through the issues, the processes will improve.

He also says there is only 1-officer in all of East Contra Costa that agencies share.

Cantando also asks for the public’s help by not contributing to homeless by giving money to panhandlers, but instead give to a non-profit that supports homeless programs. Otherwise the public is prolonging the homeless issues facing the city.

There is no doubt the methadone clinic is the source of the growing homeless population in Antioch, I read the arrests list and see the many people who are arrested for warrants with addresses outside of Antioch. The picture is clear that having the only help for the heroin addicted within 50 miles is our problem. We brought this upon ourselves and sadly the community engagement will only put a small dent in the visibility of this problem.

Actually there should be doubt in your statement, especially from a critically thinking adult. Drug abuse always has been and always will be a Health issue, not a criminal one; unless your on the side of tyranny and are satisfied with our country’s prison state as it compares to the rest of the developed world. Plus, it’s not just heroine. Many people who have had surgeries and procedures get addicted to opiates including oxycodone, hydrocodone, oxymorphone, etc. Self medication is a common part of the human experience, same reason we have NA and AA classes- people need rehabilitation in this situation, not punishment. Get off your puritan high horse, sir.

I agree with Dwayne the Big Lots parking lot is a filthy mess and something needs to be done.