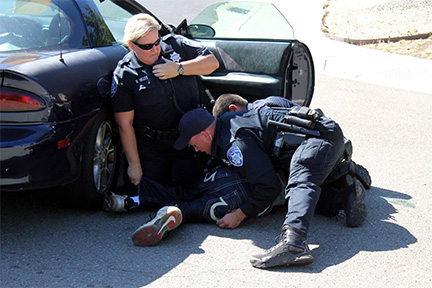 On Tuesday, the Antioch City Council could approve both body worn cameras and car cameras after nearly four years of requests from citizens. The cost is approximately $2.8 million added to the budget over five years.

The city council first took up the issue under Mayor Wade Harper in mid-2016 where then Antioch Police Chief Allan Cantando stated he wanted them, but cost could be prohibitive.  Later in the year, the council took no action due to cost.

The issue was also brought up several other times over the years under Mayor Sean Wright in budget sessions, but the item never moved forward—even after Measure C, Measure O, and Measure W monies came into the city.

After February 26 Special Council Meeting, a 7-hour marathon meeting on police reform, the council agreed to move the item of body cameras and car cameras forward—however, the council declined to bring the issue of upgraded tasers to the table which had blue tooth technology to turn cameras on when officers use them while collecting an assortment of other data.

Here is information provided by the staff report on multiple items within the agenda:

Per the Staff Report on Body Cameras:

The City of Antioch Police Department currently does not utilize body worn cameras or a vehicle mounted camera system. The body worn camera system ($1,007,767.33) is a singular unit that an officer will wear while on-duty. The camera is worn on the uniform and is forward facing. The camera can record video and audio, as well as capture still photographs. These cameras will upload content from the camera to Axon’s secure cloud-based storage system when they are docked for charging. The cameras will also include mounting hardware. With Axon’s current distribution and equipment access, they can have the Police Department trained and using body worn cameras in as little as 60 days from the execution of the contract. This will also depend on the existing infrastructure and availability of their technicians.

The car camera system is composed of two cameras ($414,341.55). The front is mounted on the inside of the car and faces forward, capturing video. The second is mounted in the backseat area and records the backseat area of the car. Both cameras can record video and audio from inside the car. Both cameras upload content to Axon’s secure cloud-based storage through the car’s mobile data computer hotspot. Police vehicles will also be outfitted with an interior and exterior antenna, modem, and hub for data. With Axon’s current distribution and equipment access, they can have the Police Department trained and using vehicle cameras in 6-8 months from the execution of the contract. This too will also depend on the existing infrastructure and availability of their technicians.

By entering into an agreement to purchase and utilize cameras, the City adds an additional layer of accountability and transparency to the community. The cameras can increase officer and public safety, improve officer training, and improve officer response.

The benefits of the Axon camera systems are video recording and playback of incidents, multiple microphone audio recordings, real time alerts and activations of camera systems, cloud storage which is easily accessible to review for cases and court summons, and a system the District Attorney’s Office is already trained on and using for court trials and testimony.

The Axon camera platform allows officers to capture photographs, videos, and audio evidence in the field and directly upload it to an investigation or incident. Additionally, there is a mechanism in place to allow for crime victims to upload their personal photos/videos into the cloud and attach it to their working cases, allowing for increased police/community interaction and streamlined customer service.

The five-year contract with Axon Industries covers all hardware and software updates, as well as all camera equipment and replacement parts for the duration of the contract. At month 30 of the contract, all cameras will be upgraded (at no cost) to the most current platform. This will also happen again at month 60 (at no cost).

Currently, the Police Department is in the process of upgrading the CAD system to Mark 43. A feature of the Axon software is it allows the cameras to communicate with the CAD system. This will allow the cameras to gather information related to calls for service and attach them to videos. This feature allows the camera to grab the Officer’s identification from the call, the time Officers arrived at the scene, as well as when they cleared the scene, and categorize the call. The purchase of the interface software from Mark 43 would allow the cameras to interface with the existing CAD/RMS systems and share information and data with each other. This would be a one-time purchase.

Sole source justification for the Axon Enterprises Inc. is requested and based on the following facts and circumstances:

Axon Industries is the only company that offers this equipment with these capabilities and is currently the industry standard. The District Attorney’s office is already trained on this platform and is currently using it for the prosecution of cases. Axon cameras are one-of-a-kind and not sold through distributors, the manufacturer is the exclusive distributor.

With body cameras, the Records Bureau will be directly impacted with new content received on a daily basis and staff are needed which is why police are making this request.

The City is seeking a 3-year sole source contract for $381k (or $127k annually). The company will help Antioch Police to view and analyze its data in real-time. The technology will assist the department with responding to Public Records Act requests, subpoenas, and the public demand for meaningful fact ­based information related to policing (i.e. personnel records, informal and formal public contacts, community engagement, deployment of resources, crime trends, policies and procedures, use of force, etc.).

According to the Staff Report, currently, the cities of San Pablo, Pittsburg, Pinole, and Hercules are using Peregrine’s solution

The staff report highlighted how the software will potentially save the city $90,584 annually.

Using Peregrine Technologies, it takes about fifteen (15) minutes for a Records Technician to build an electronic case (i.e. create a digital folder and drag and drop components) and share a secure link to the folder that is DOJ/CJIS compliant. At about $14.00 a case and twenty-five cases a week, that equates to about $18,200 annually. A potential net savings of $90,584 in staff efficiency annually.

Currently, Records and Investigations staff must manually package (3-copies) of criminal cases (to include digital evidence) to deliver to the District Attorney’s Office in-person. This is due to mandated Department of Justice (DOJ) and Criminal Justice Information System (CJIS) security compliance standards. On average, the Investigations Bureau will prepare and package approximately twenty-five (25) cases a week for the DA’s office at forty-five (45) minutes per case.

Digital evidence for each case is saved to DVD-R or USB flash drives (due to the data volume of audio, pictures, and video), and compiled by detectives, evidence technicians, or dispatchers, which can additionally take about fifteen (15) minutes per case. Afterwards, and often daily, a detective must commute about thirty (30) minutes to the DA’s office in Martinez to file critical cases while dropping off or checking in others. This equates to 18. 75 hours a week for Records Technicians (@ $57.53 hr= $1,079), and 10.25 hours a week for Detectives (@$98.85 hr= $1,013). The potential savings (not counting other factors like gas, office materials, miscellaneous deliveries to Martinez, time processing/signing warrants, etc.) equates to $108,784 annually.

Good. Maybe then we can have an honest debate on police reform having getting the chance to see how Antioch Police are truly treated on the streets with lots of misinformation and false accusations. This should have been done years ago. Sad that a guy like Lamar Thorpe is going to take credit for this.

Lamar will be the one to shut it down. He and Walker need to go.

What’s ” sad” is that it took so long to implement a common sense idea. I mean, really. The body cam proposal first arose when Wade Harper was Mayor. Meaning we went through a couple years of harper and FOUR years of Mayor Wright and NOW, under Mayor Thorpe, the PD will get body and dash cams. A serious PD would welcome this opportunity to have its justice practices open to the public. Why the City Council took so long to adopt the policy is beyond comprehension. Kudos to Mayor Thorpe, Chief Brooks and the APD for going for transparency

Long overdue and unbelievable APD does not have cameras when this part of every other police force’s regular attire. These cameras provide importance evidence and information. Antioch could also use a few more shot spotters and cameras around town instead of wasting money on logos that look like Amazon’s.

Did you just move here to the city? FOUR years of Counselman Thorp, the one of many that kept REJECTING the approval of Police Body cameras. Now, he is ALL for it? Come on and wake not WOKE up please.

COME ON NOW —- LOVABLE has a memory problem. It was Thorpe as councilman who kept rejecting the purchase of body cams for the police. Now, suddenly, he approves of them? What a fucking retard! That also goes for the arsonist.