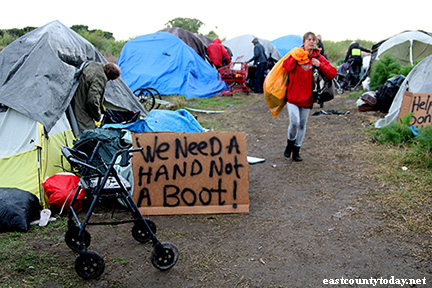 On Tuesday, the Antioch City Council voted 5-0 to amend the fiscal year budget by allocating $150k to a newly created Homeless Services account within the City Manager budget.

The move comes after the City Council had created a Homeless Encampment Ad-Hoc Committee which provided a series of recommendations to the full council on both short-term and long-term solutions to address homelessness in the city.

During the October 22 City Council meeting, the council went through a laundry list of items to address the quality of life within the city and the homeless.

The list for quality of life came out to $50k which includes:

The list for Immediate Short-term Housing came out to $100k which includes:

According to the staff report, the purpose behind the $20k for miscellaneous is for any unforeseen overages.

Councilwoman Lori Ogorchock said she was in favor of moving forward with the quality of life issues and spending the $50k, but suggested they hold off on the $100k for Immediate Short-term Housing until they have a homelessness coordinator hired who could research and find out exact costs for those services.

Mayor Pro Tem Joy Motts stated her confusion explaining she thought they had went through all these items.

“We made some decisions,” said Motts. “I am a little confused because I think we all supported this. Some of these things on the second page, I think these immediate short-term needs for motel services, safe parking lots, and warming centers, these are just critical through the winter.”

Motts further highlighted that it was important that somebody from staff look at all the different options and that they hire the consultant as soon as possible because none of what they are proposing is available from the county right now.

“Everything we’re doing right here is above and beyond what the County is doing. So we’re taking the extra step to try to help people find some solutions,” said Motts. “I think these things are critical.”

Ogorchock further explained her position stating the quality of life issues, they all had agreed they were important and were going to look at the other ones (Immediate Short-term Housing)

Ogorchock clarified her stance say she wasn’t saying it shouldn’t be done, but needed more investigation and it should be completed by the homeless coordinator.

Councilmember Lamar Thorpe immediately then made a motion to move forward to amend the 2019-20 budget to allocate the $150k in funding. The motion was seconded by Motts.

Ogorchock then proposed a substitute motion asking to split the items to approve the $50k for quality of life and then have the homeless coordinator further investigate the other items and bring it back with actual costs calling the current proposal “guesstimates”.

Ogorchock had substitute motion die for lack of a second.

Motts contended they had already discussed this at a previous meeting and utilizing services already available from the Winter Nights Program and the Safe Parking Program.

Thorpe agreed saying that they already discussed this saying part of how they got to this point was to accommodate both Ogorchock and Mayor Sean Wright.

“So then you two voted against the homeless coordinator and I think we just need to vote and move on because this is exactly how we laid it out for staff and it was to accommodate specifically the both of you,” said Thorpe.

Ogorchock said they did discuss it but nothing was approved because it had to go before them with the budget. She also said no one from staff has been delegated to do these items.

“I understand it has been brought up. We have no homeless coordinator and we don’t have anybody to do these jobs,” said Ogorchock.

“It feels like we are getting ready to discuss our way out of doing something and I don’t want that to happen,” said Wilson who clarified with staff if they don’t use the money, they can re-allocate later and the money is still there.

The council voted 5-0 to approve the budget allocation from the general fund to a homeless services account.

By creating this specific fund, they hope to improve accountability on spending and simplify accounting of expenditures for these purposes.

Back in September, the Council agreed to spend $100k on an Unhoused Resident Coordinator (consultant).