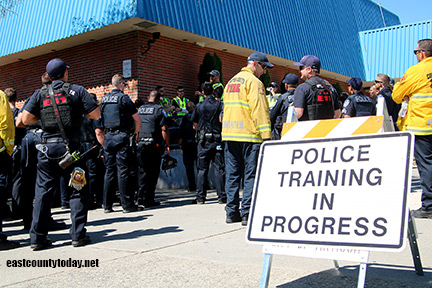 For the most part, the Antioch Police Department had already been doing these three reforms.

Councilmember Mike Barbanica took to social media after the meeting to explain why he voted on all three items and motioned for them:

Tonight there were three issues on the agenda concerning the police department that were passed. I actually made the motion for all three and Council Member Ogorchock seconded all of them. None of these were “little to no discussion” items. These have been talked about for months. The city did meet and confer with labor associations. The administration was consulted for input. They have been discussed during past meetings where the agenda was being set. Tonight was the final step.

Hiring practices– This item goes back to February 26, 2021. This stops the city from hiring a lateral officer (usually working for another department) that is currently undergoing certain internal affairs investigations including excessive force and serious misconduct. It also precludes us from hiring officers with sustained investigations for excessive force, sexual misconduct, dishonesty, falsification of documents and serious misconduct.

Training– This item goes back to February 26, 2021. This establishes a training matrix of mandatory training for officers including de-escalation strategies, crisis intervention and mediation/conflict resolution. It also covers such things as implicit bias training and recognizes the diversity of our community, while incorporating this into the training. This is nothing new to police work and similar topics were taught when I went to the academy in 1988. This has just grown over the years.

Notification Process– This item goes back to the initial discussion on February 26, 2021. This establishes a policy of notifying the City Council when major events happen within the city. This too is nothing new to police work. I can speak from experience, when I say that for years I was involved in council notifications when I was a watch commander. This now identifies when and how this and future councils will be notified. Several times, we have talked about taking a step further and setting policy for the public as well. This was the first step in that process.

Moments after the meeting I started receiving messages from people I know that had incorrect information about what occurred. I wanted you to hear it straight from me.

These are all positive things to continue to strengthen an already GREAT department with GREAT leadership. This just assigns policy to it. And again, members of the department were met with and gave input.

Spending a great deal of my adult life in uniform I am a supporter of law enforcement and APD. Just after the election, Chief Brooks met with me and said that he would always support things that would help this department get better and grow. That is because he is a true professional and I appreciate that about him.

These are good things for the future of this department and I appreciate their support.

The Antioch City Council is aiming to eliminate candidates who do not meet minimum community expectations while they stated hiring lateral officers shall meet or exceed Peace Officer Standard and Training (POST) as it relates to screening for implicit biases that may impede a Police Officers judgement and performance when interacting with members of the public.

“The City of Antioch’s lateral hiring process shall meet or exceed Peace Officer Standards and Training (POST) as it relates to screening for implicit biases that may impede a Police Officers judgement and performance when interacting with members of the public.”

At the City Councils request, a community-informed training paradigm for sworn personnel is proposed. Training topics have been identified to reflect community values in the City of Antioch. The training matrix will be reviewed by the governing body.

According to the Resolution:

The proposed communication protocol ensures timely notification specifically to the mayor, city council, city attorney and public information officer. The police chief, city manager or designee shall convey reliable and accurate information via email, text or phone to the above identified individuals. Notification shall be provided as soon as practicable and within 24-hours of occurrence.

Per the staff report, this notification protocol for critical public safety incidents is separate and apart from APD external communication to inform the public of issues or matters that pose an immediate threat to public health and safety.

Per the resolution, this will apply to: fatal incident protocol, officer involved shooting, officer involved discharge of a firearm outside of the training environment, an officer shot or critically injured on duty, in custody death, a homicide, mass casualty shooting, a sniper, a fatal accident, pedestrian hit by a car resulting in serious injury or death, a hostage or barricaded subject, a significant hazardous materials incident, an officer arrested on or off duty, prison break, a riot insurrection or potentially violent demonstration, an airplane crash, a major fire and destruction of an explosive device.

Within the Resolution, however, it does state that related to police misconduct, it shall be identified as critical public safety incidents subject to the notification protocol upon the employees placement on administrative leave.

WTF California: Is Using the Word “Ghetto” a Fireable Offense?

I have said it before and will say it again. In order for a working Police Reform you MUST start with a Community Reform. The “Citizens and Community” must ACT appropriately for the Police to do the same. That being said, it MUST start at the top “Mayor/Council” must acknowledge that the city is in dire need of people acting humanely and responsible and held for THIER actions with consequences.
Best saying I have ever heard, “One shall not cast stones at glass houses while standing in one of their own.”

True, the community has a lot — an awful lot of bad actors — who need to shape up! That being said, police officers take an oath of office, citizens do not. One must be held to a much higher standard.

This “community” now consists of A LOT of criminals we never had before ….. who committed crimes, were caught by the police and didn’t like it. So, now they want to “deball” the police! This is understandable. However, it puts the non-felon citizenry in danger!

Unfortunately, a majority of the current council thinks that a need for police reform is Antioch’s fundamental problem. It is not. CRIME is Antioch’s most pressing problem.

The makeup of this City Council makes me so sick that I cannot watch their meetings. Not even with the barf pan within reaching distance. I had some hope for Barbanica and Ogorchok, but I see that they joined the 3 idiots now. How did Antioch fall so low?

OH YESSSS! With Gruewome Newsom announcing he will let 76,000 VIOLENT felons out of prisons, we really need to defund our police, don’t we? These City Council members are total imbeciles! THEY ARE PUTTING OUR RESIDENTS IN DANGER! I can just see people rushing to sign up for training at the POLICE ACADEMIES… NOT! Fewer and fewer police will sign up for jobs here and who could blame them! We are in dire straits here. As residents, we need to be protected and now we will have to do it ourselves. Maybe this will help dispense many of the criminals who moved here. Think about it!