On Tuesday, the Antioch City Council provided direction on a new logo that will help sell the idea of “Opportunity” for the City of Antioch.

The council was provided with four options in which the Council ultimately agreed to move forward with the option that included a reference to the delta (option2).

David Kippen, of Evviva Brands, explained Tuesday that the logo symbolized a rising sun over the Delta and the water which was reflective in the line “opportunity lives here”.

Kippen stated that the logo provided a very different feel than what other cities had – examples included City of Fremont, City of Redwood City, City of Oakley, City of Long Beach, City of Oakland.

“It’s a very strong statement and it powerfully underscores the idea of opportunity,” said Kippen. “It makes opportunity part of the message of Antioch.”

Kippen urged the council could come up with a decision Tuesday so they can move the mark into advertising within a week. He warned them If its delayed further, they would launch with the word Antioch and swap it out later with new mark.

“I encourage you to make a decision tonight if you can for a couple reasons. One, it would be great to launch with a campaign. Second, though this is the first time the marks have been presented to council, we have been back and forth with staff a number of times. We have been through a long selection process, these are all very strong marks, they will work well,” explained Kippen.  “This gives us the opportunity to go to market not as a campaign, but Antioch has a campaign and its making a statement about itself in that campaign and its rebranding which is a much more powerful message.” 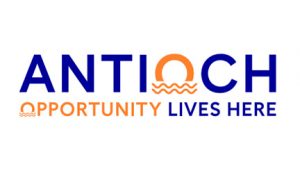 Councilman Lamar Thorpe stated he was shocked by the “rising o” in option 4 and it grew on him because it represents the uniqueness of Antioch and even the State of California.

“This Gateway to the Delta, while I appreciate it, not that we are talking about that, we tend to think of ourselves as the Bay Area and not necessarily the delta,” said Thorpe. “Gateway is something you cross and go somewhere else and we don’t want people to go somewhere else we want them to come to the City of Antioch. I like this fun one, I think its exciting.”

Councilwoman Monica Wilson stated she liked Option 1 because it was “clean” and “simple”. She also liked Option 2.

Wilson later stated she didn’t like Option 4 because it looked like the “o” was running away or trying to get out of Antioch.

Councilwoman Lori Ogorchock stated she thought the river was a “gem” and a huge part of Antioch and likes the idea of the sun rising over the water.

Mayor Sean Wright explained he was okay with all four of them but stated he liked the “rising o” best but had no problem going with Option 2 if that is what the majority wanted to do.

“The women have spoken,” stated Thorpe. “I am not fighting the women.”

The selection of the logo is part of a branding and marketing plan for the city of Antioch after they hired Evviva Brands to roll out a $236k marketing plan over the next 6 months to improve messaging.

Humanitarians of the Year Awards to be Presented...

Extremely weak design. ANTI- is highlighted, a negative preposition. What a failure by our city in hiring this contractor. This could’ve easily been done as a contest from local art students from high schools and LMC.

Is this City Council blind? Stupid? Or ignorant? Do they not see ANTI OPPORTUNITY stands out? No color combo or sales job will change that? This campaign is effectively ruined and just through $500k down the drain.

Economic Development Director should be fired. This firm should be fired, after all, these are the same guys that had in their proposal gourmet ghetto of cannabis cuisine. In 2020, the city residents should fire all 5 council members when they move to Districts. I have had enough of these tone def and moronic decisions making Antioch look bad.

This logo is fucking ridiculous. There is absolutly zero opportunity here in antioch. Well i take that back theres the opportunity to become a homeless meth addict begging for change on the Ast/ lonetree off ramp. Your city council members are dillusional. Good luck polishing this turd of a town. This town is garbage and always has been. Leave while you still can.

The topic of discussion should be on the design, not your personal failures. If you can’t find opportunity in this town, then you yourself are the problem. Life is hard as it is, but even more difficult when limit and victimize yourself, then go and blame others for your problems. You sound extremely immature, pathetic, and you’re the “delusional” one. Go exercise, practice mindfulness, eat healthy, and then express yourself accordingly.

I am stunned. This is awful. This company has no vision at all and we continue to dump money down a rat hole
What is wrong with this council?.

Where are the signs going to be posted? Oakland, Richmond

I am with Lori. I have always liked the current logo with the water and sailboat. Boating is the one opportunity there is in Antioch. You can park them at your houses and drive a short distance. How lane when there are zero opportunities to work and/or open a business in Antioch. If, do tell.

I don’t see any posting from a “Lori.” Has it been taken down?

Councilwoman – Lori Ogorchock. It helps to read the article first.

for the fastest way i choose the 2nd

I can’t bloody BELIEVE the City paid this firm $500K to come up with these horrid logos? What were they thinking? I bet it took whoever came up them months and months of contemplation. A five year old could have been more creative!

Go on amazon.com, I saw the exact same lettering and artwork.