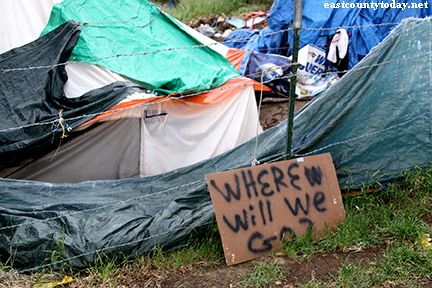 On Friday, the Antioch City Council continued their city council meeting which the Transitional Housing  Ad-Hoc Committee provided an update of the direction they are seeking the city move towards housing homeless.

On Friday, however, Motts and Thorpe focused on directing staff to work on producing a feasibility analysis of the proposal and to look at service models that could support their bridge housing proposal. They also sought to begin an RFP process.

The motion to move forward ultimately passed in a 3-2 vote with Councilmembers Motts, Thorpe and Monica Wilson in support with Mayor Sean Wright and Councilwoman Lori Ogorchock dissenting.

During discusison, Councilwoman Ogorchock asked about the feasibility analysis and what it would look like.

According to the consultant, she explained this would be based around questions already asked such as what the program model could look like—what would be accomplished with these rooms, who would be served, what kinds of services would you need to have, what could they leverage from the county system and what would the cost look like. She also explained it would answer questions on the property itself and appropriateness.

Ogorchock asked a series of questions which included:

“On top of the county and having a case manager or service provider, these are already above and beyond that are offering their services to be able to support what we are trying to do here,” stated Motts. “I understand its complicated and I am sure you have a lot of questions, we don’t know how its going to look yet, that is what is important about the feasibility study, so I think a lot of your questions will be answered.”

Ogorchock challenged Motts asking how could you have the City Manager negotiate when you don’t have the feasibility study complete or the service model in place.

Thorpe replied the city manager was not negotiating for the services, just with the hotel for the rate for the rooms.

Councilwoman Monica Wilson said they needed to get the feasibility study done to answer a lot of their questions in regards to service providers, costs, who is going to run the program.

Thorpe confirmed they were looking for the feasibility study on the location, service model, and direction on the RFP process for local hotels.  Thorpe also brought up Rocketship School stating if there were kids at the hotel, they wanted to be the school that wants to take these kids in and provide them stability while they are going through bridge housing.

“We absolutely know and this has been a part of everything we have researched that this does not work without extensive wraparound services without unique service provider, all of the questions you are talking about are going to have to be apart of making this successful,” stated Motts. “We are not by any stretch of the imagination asking people if they want to stay in a room, leaving them there, and walking away. To the contrary, its complicated, its extensive, but so is what we are doing now who are spending millions of dollars and its not doing anything but pushing people from one side of the street to another. I think that is a terrible misuse of public funds.”

Mayor Sean Wright stated everybody is centering around housing first model around the nation and a housing first model is one that works calling the Motel 6 in Pittsburg as something that is helping but questioned how much collaboration they are having with the county.

“I’ve talked to both Supervisors (Diane Burgis & Federal Glover) that represent our areas and they don’t feel like they are apart of this process,” stated Wright.

“I just talked to Federal Glover today and he is very involved in the process and very pleased that how its going over at Motel 6 thus far,” stated Motts. “He indicated to me that he is seeing some of the same kind of success over at their hotels throughout the county.”

Thorpe said he also spoke with Federal Glover and was puzzled by the mayor’s question.

“I want to be very clear, the contact has always been LaVonna Martin, and as a matter of fact, when we brought our last proposal that was a big emphasis by you and councilwoman Ogorchock, so the contact has been LaVonna Martin,” stated Thorpe. “Now we are adding this caveat, not a caveat, I am just puzzled that you would reach out to both of them and ask if we have engaged them.”

Thorpe continued stating this was complex work and work on the wrap around services for basic principles.

“If the Supervisors want to be directly involved and set up meetings with us, they are more than welcome too,” stated Thorpe. “But our objective here was get the concept here with the hotel and wrap around services to try and get that discussion moving.”

Wright stated he believed this needed to be a regional approach and something they were working with the county on—including access to funding. He further clarified the difference between the county trying to purchase a building versus a lease and paying money year-after-year.

Thorpe argued it started with a lease and they learned and purchased the building. He also stated they are looking at all opportunities.

“What I am looking at here and my hesitation on this is the cost of this that comes to the city,” stated Wright which the city is spending $1.2 million a year and this proposal would not offset that. “You can’t tell me we are going to rent 32-rooms and that we are not going to have a $1.2 million cost and you can just shift that money over, there is still going to be a big cost. If we have 600 homeless on the streets and we help 32 of them, its great that we are helping 32 of them, that is phenomenal, but that does not take away the cost from the remaining homeless that may still be on the streets.”

Motts called that accurate, but that this was “bridge housing” and people would be moving through there. People could be there a week or four-months.

“We are not providing housing, we are providing bridge housing so they can get the services they need,” stated Motts. “Ultimately, we hope to service a lot more of these people.”

Wright argued he was talking about Motts’s cost by taking the $1.2 million the city already spends and shifting it over. Motts said there would be obvious costs, but stated the $1.2 is what they are already spending on cleanups and moving homeless around.

Thorpe then made a motion to move forward:

Thorpe replied he was “fine with his motion” and recognized the RFP process would take longer and would occur after the feasibility analysis and service model and wanted to jump start it.

After staff sought clarification of what the council was asking, Thorpe replied again “I just said my motion was fine and so I don’t want to change it so I would like these things to happen concurrently.”

Mayor Wright stated he had the same position as Ogorchock and called the feasibility study both “wise” and “needed” but called the RFP process putting the cart before the horse.

“I would love to vote for one and not the other, but if the motion is one and we are not going to vote on them separately,” stated Wright who was cut off by Thorpe explaining they know the RFP process will take longer than the analysis.

Ogorchock asked if Thorpe would split up his motion. Thorpe declined calling his motion “fine”.

The council then voted 3-2 with both Wright and Ogorchock dissenting.