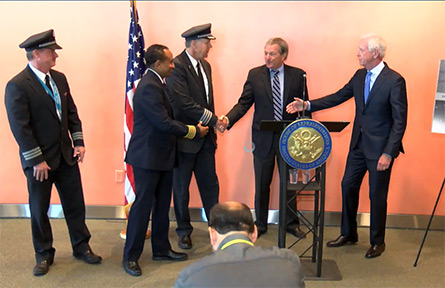 “In recent years, runway incursions in the U.S. increased by nearly 83%. With near-misses on the rise, we need to act now to ensure that those incidents do not turn into accidents and that our aviation system remains the safest in the world,” said Congressman Mark DeSaulnier. “With two years of research and expert input on multiple near-miss incidents, the product is what the flying public deserves. I appreciate the guidance we received, especially from Captain Sullenberger and CAPA President Captain Rooney, to be proactive and address near-misses before they turn deadly.”

“As aviation has become safer, it has become harder to avoid complacency. We have made air travel so safe and routine, some have assumed that because we haven’t had a lot of accidents in recent years we must be doing everything right. But we can no longer define safety solely as the absence of accidents. We must do much more than that; we must be much more proactive than that. We need to proactively find flaws and risks and mitigate them before they lead to harm. We must investigate accidents before they happen. I enthusiastically support Congressman DeSaulnier’s bill, which will provide the resources and means to make that a reality, and allow us to continue to do everything possible to protect the safety of Americans when they travel by air,” said Captain Sullenberger.

“We applaud Representative DeSaulnier’s proactive efforts to improve aviation safety with the ‘Safe Landings Act’,” stated Coalition of Airline Pilots Associations (CAPA) President Captain Larry Rooney. “Aviation safety is a direct result of the continued collaborative efforts of all stakeholders to ensure that the safety of the traveling public remains paramount. This legislation provides the latest opportunity to further refine and improve on known and newly discovered safety deficiencies. CAPA looks forward to providing the subject matter expertise necessary to ensure that this important safety legislation becomes enacted into law.” CAPA represents roughly 30,000 pilots and many pilots unions.