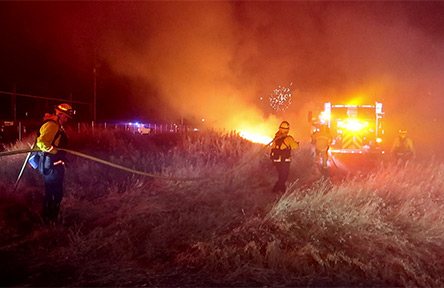 According to police, as part of their Zero Tolerance Proactive Enforcement Detail, 12 officers and a supervisor were on specifically assigned to respond to all fireworks and related complaints throughout the city.

No citations were issued and no arrests were made, however, police did confirm officers did confiscate numerous amounts of fireworks throughout the evening.

Pittsburg Police were the only agency to respond to the question on how many arrests, tickets or citations were issued Thursday night as Contra Costa County has a zero tolerance stance on illegal fireworks.

The Brentwood Police Department confirmed they had 35-calls for service for firework complaints with 2 citations issued. That number is expected to rise. They expect additional data to be released Monday.

The City of Antioch, City of Oakley and Contra Costa County Sheriffs Office have not yet responded to the request for information.

On an earlier post, it was reported that the Contra Costa County Fire Protection District had  37 fires only July 4. They also stated that 5 of them were confirmed linked to fireworks, but noted it was likely the majority, if not all, were results of fireworks.

Will update as data becomes available.