At 2:42 pm Sunday, Contra Costa County Fire Protection District firefighters were dispatched to a report of a vegetation fire which turned into a 3-alarm fire response off the 2100 block of Piedmont Way in the City of Pittsburg.

At least one firefighter was injured and treated for smoke inhalation and later transported to a local hospital. 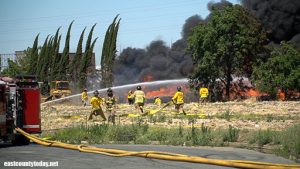 According to Steve Hill, Contra Costa County Fire spokesperson, the fire was started from a homeless encampment on the north side of the yard at Elite Roofing Supply Company.

Hill stated that although there was a large column of smoke, firefighters prevented the fire from reaching the building. Instead, it burned vegetation that entered the yard and caught multiple outbuildings on fire, burned roofing supply equipment such as PVC pipe, insulation, and a number of vehicles including fork lifts and trailers.

The fire also caused multiple spot fires in the area that were quickly extinguished in an area full of commercial buildings.

“This is a great case for creating defensible space,” said Hill. “A lot of these fires we get to quick and keep them quick, in this case, there was no wiggle room, it burned immediately into roofing supply company so there was no chance of catching it.”

Hill added that a very high number of grass fires lately have started in or near homeless camps in East Contra Costa County and was looking into data saying it was close to around 50% and should have the data in the coming weeks.

God damn it! It’s the freaking homeless bums setting these fires! The have to be caught and dealt with! We could see and smell that smoke even to Concord.

Glad I wasn’t in town when this happened.

Ah! Another homeless encampment fire? I’ve seen quite a few of them setting up their tents here. This has become a serious problem!

The word “homeless” is a misnomer of the American left.  There is no guarantee of housing in the US Constitution or the Bill or Rights, is there?  So, what do you do with them?   I have a solution.  You forcibly round up every bum in every city and you move them to land where nobody wants to live in and to housing built for them army barrack-style and you make them work and clean themselves up and you give them the help that they need.  You get them the hell off the streets because the streets are uninhabitable right now.

Let me tell you something about civility.  Without civility there is no society which is exactly what we have in most cities we have today … a truly uncivil society…  which is collapsing across America.

At the rate these fires are starting, these bums will burn our city down! This is just the beginning! Are we going to stay up all night keeping an eye as to where the next fire is set?