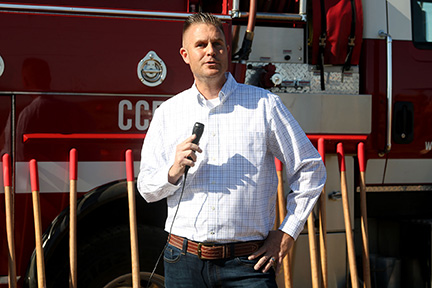 This is a station that was first planned in 2002, 4-years after I started my career at the Bethel Island Fire Protection District. Because of the recession and its terrible impact on East County, 16 years passed before we could break ground on a station that, when it is opened and fully staffed, will cut response times to Oakley and parts of Bethel Island by 50%. This will also improve response times to the entire district, due to increased system resources.

The path to get here has not been easy and the path forward will be just as challenging. I’m encouraged by the level of engagement in our strategic planning process and the many residents I’ve met over the last year with a simple question, “What can I do to help?”

The most important thing we need from everyone right now is your continued participation in the strategic planning process. We’ll be holding a town hall on October 18th in the Brentwood City Council Chambers to present the draft strategic plan and a second community workshop on November 14th at the Knightsen School where we’ll ask for your feedback so we can prepare a final plan.

The plan will be finalized in December for discussion by our newly elected Board in January.

I recognize what a long process it has been to get here and how it may still feel like we are a long-ways away. ECCFPD is a consolidated district that used to serve small rural communities and now serves suburban and rural communities with many more residents and much higher call volumes. All of these communities have a role to play in creating a plan that the entire district can support. There is no short cut, but it is my belief that residents will support a vision they helped create.

I can tell you that in my time here as a Firefighter Paramedic, as a resident of Brentwood and later Oakley, as a husband and father to two young girls (our youngest just 1 month old), and as a Director for ECCFPD, I have never been more hopeful that we are on our way to improving service levels. I lifted that symbolic spade of dirt with a team of people working together to build public confidence by being transparent, open, and direct. With your continued engagement and support, I expect that we’ll soon have that station open and staffed.

Any time you have a question or concern about the district, please reach out to me directly at [email protected] or at 925-584-0592.