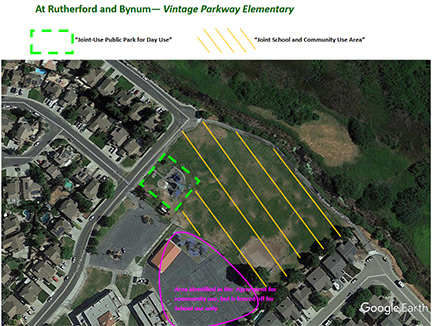 The City of Oakley, in an effort to save $150,000 in costs, is proposing it cancel its Agreement for Park Facilities between the city and the Oakley Union Elementary School District.

This could result in the closure of 4-parks within the City of Oakley.

The item will be taken up on August 13, 2019 at the City Council meeting. Aside from costs, and confusion of who is responsible for the parks, the city is citing residents who call and use social media to complain about the park safety and condition of the area as reasons to cancel the agreement.

According to the staff report, the current deal was put in place prior to the city incorporating. In 2002 , it was renewed when the City and school district jointly funded various park areas on school district property for residents to use.

As has been discussed with District officials over the years, the maintenance of these areas has not met the standards and expectations set forth in the Agreement. Furthermore, residents are often confused about who is responsible for the park areas and the City frequently receives calls and social media messages about concerns with the safety and condition of these park areas. We refer these residents to the District, but the complaints are common and the maintenance of the areas has not significantly improved and has even deteriorated.

The park areas referred to in the Agreement are arguably no longer needed by the City, are not well maintained, and the funds currently sent to the District can be much better utilized with the park and landscape areas the City must maintain – providing a greater benefit to the community

Currently, the City of Oakley has 35 public parks with 2 more under construction.  The City is also recommending the school district remove any unsafe an damaged playground equipment an utilize the properties as it sees fit.

If the council votes to approve the cancellation, it could go into effect by February 17, 2020 and the city would then retain its $150,000.

On Friday, Oakley Union Elementary School District Superintendent Greg Hetrick, he was unaware the item was on the agenda and said the city was removing its responsibility of maintaining local parks in certain areas of Oakley.

“They are washing their hands of us and don’t have to do anything. The school district would then maintain something we do not use, which we won’t do. We will take them out,” explained Hetrick.

Hetrick said he had hoped to work out an agreement where the City could lease the property for $1 and then maintain the parks for continued community usage.

“When people say the school district sucks, it’s a park. We don’t have the manpower to man it.  There has been an ongoing issue with the quality of care, if someone takes a hammer and damages a slide, we have to order it,” said Hetrick. “It’s not something that from the school district perspective, that our students use each day, it’s a park, we are focused on spending our funds on education.”

Hetrick pointed out that a few of the parks that could be lost are in areas where residents really have no other parks to utilize such as Vintage Parkway and O’Hara Park Middle School.

For a copy of the STAFF REPORT, click here. Below are the attached documents associated with the agenda item:

Here is a look at all the parks that will be impacted:

City of Oakley Names Dean Capelletti as Next Chief of Police