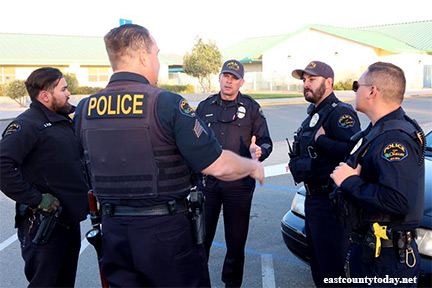 On Tuesday, the Oakley City Council approved spending $250k of ARPA money for recruitment efforts to help increase the Oakley Police Department staffing levels without having to lower hiring standards. This includes a $10k hiring incentive.

Jeri Tejeda, human resources director, presented the request to the council citing the current status of the department:

“Time is of the essence for us to try and get people to apply for the city of Oakley,” said Tejada calling the status of qualified applicants as “very hard to find right now”.  She also said most of the applicants who have applied have not met the minimum requirements.

She noted the Oakley Police Department, unlike other departments in surrounding area, do not sponsor academy recruits—they must pass the academy and hold a POST certificate before they can apply.

“Most of our applicants are looking for some place to go because they have been unsuccessful in other departments,” explained Tejeda. “This is where we have stayed very true to who Oakley is and we have been very selective in who we are choosing. Sometimes that is really hard because those are the only applications coming through the queue. We are only putting through those who have prior experience, good people, are qualified and meet the expectations of what we expect from our Oakley officers.”

Tejeda called advertising and marketing “expensive” as they are trying to get their message into the right hands of potential candidates.

Tejeda further explained that advertising and marketing is expensive as they are trying to get their message into the right hands of potential candidates.  She also said they have had 7 officers choose Oakley since ARPA funds were awarded in July of 2021, including some just three weeks ago.

The ARPA funds would also include retro pay to officers hired between July 2021 to October 2022.

Hugh Henderson spoke during public comments saying he supported the item and encouraged the council to move forward to enhance the city’s ability to improve staffing levels.

Councilmember George Fuller asked if there was a pay back clause if someone is paid out and leaves after a year.

Tejada explained that there was no payback after 1-year.

“That is a little troubling but I won’t say no,” said Fuller.

Fuller then asked when the bonus goes away when does staff foresee Oakley having to compete with salaries of neighboring police department.

Tejeda explained they are now in a 5-year contract with the Oakley Police Officers Association with a new Step System which includes a 5% increase at each step and a 3% cost of living increase. She also noted that Oakley now is at the top in terms of pay when compared to the seven comparable cities.

Councilmember Sue Higgins came out and said, “I say we just do it.”

Councilmember Aaron Meadows said he was for it.

Mayor Randy Pope, who is a 30-year police officer, now sergeant, said he has seen these challenges first hand.

“Police officers feel like they have had war declared against them and many are choosing not to do it anymore. I would say almost every police department in the nation is struggling with this, it isn’t just Oakley. They are all coming with creative ideas to attract qualified applicants, so we need to also” said Pope. “

Pope also explained some agencies have lowered the standards to increase the qualified pool, which that has caused some issues—even for neighboring agencies such as Alameda County.

Chief Paul Beard, who became a police officer in 1990, highlighted the minimum standards to become an Oakley Police Officer. He also shared when he went to take a test, he was 1 of 440. He was 1 of 4 who made it to the academy.

“I state that to share how popular the job was in 1990 and how far we have fallen out of favor of society normal for someone to want to become a police officer,” said Beard who noted some agencies have to make modifications for who they would hire. “I can firmly tell you we have not changed our standards at all. This agency has gone through four chiefs and I have not taken the stance we are going to change our standards to hire more bodies. I only want the best.”

The council then voted 5-0 to approve the resolution.

The money would be used, with flexibility, in the following efforts: