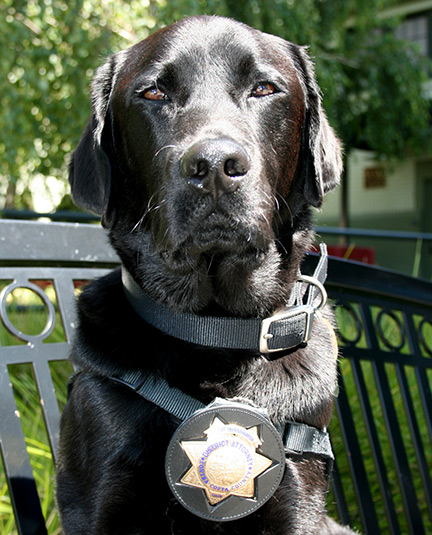 Martinez, Calif. – The Contra Costa County District Attorney’s Office is excited to announce a facility dog “Bear,” trained by Canine Companions for Independence, has joined our Office. Bear will be helping victims of crime during all aspects of a criminal case, especially children. Bear was bred for optimal temperament to work with children and adults in courtrooms, public settings, and in facilities where stress levels are high.

Assistant Inspector Janet Era is Bear’s handler. Bear and Assistant Inspector Era are both certified by Assistance Dogs International. They both had to pass standardized practical tests and have continuous ongoing testing to keep their team certification current.

Earlier this year, Assistant Inspector Era applied for and was accepted by Canine Companions for Independence for a facility dog placement. She was trained by Canine Companions for Independence during an extensive and educational team training in Santa Rosa, California. She was eventually paired with Bear based on her interactions with the dog and his interactions and responses to her during the training.

“The handler doesn’t pick the dog, the dog picks you. Being partnered with Bear has brought a sense of calm to the environment we work in. Observing the change he instantly makes in a victim’s life makes me grateful to be partnered with him,” said Assistant Inspector Era.

Bear is a highly trained facility dog. He is able to respond to over 40 commands and has already learned several of his commands in Spanish. He is 2 years old and his birthday is April, 17, 2017. He works with victims and witnesses by providing unmatched emotional support during the investigation and prosecution of criminal cases.