Here is a nice Press Release from our friends at Restore the Delta which explains why repairing the levees are a better option than a Peripheral Tunnel. What is beautiful about this plan is its much cheaper at just $2-4 billion  rather than the $20 billion or so estimated for the tunnel conveyance around the Delta.

SACRAMENTO -Experts today rebutted Governor Brown’s recent statement, that restoring Delta levees, as an alternative to constructing Peripheral Tunnels, is not “feasible.” “Restore the Delta and engineering and economic experts strongly disagree with Governor Brown’s advisers, who appear to be misinforming him about the alternatives to building the Peripheral Tunnels,” said Barbara Barrigan-Parrilla, executive director of Restore the Delta.

“Governor Brown’s claim that fixing Delta levees is not feasible indicates how deeply misinformed he is by leaders at the California Resources Agency.  The Economic Sustainability Plan published by the Delta Protection Commission illustrates that such levee repairs are necessary – even if the twin Peripheral Tunnels were built – in order to protect the 4 million people who live behind Delta levees.  Unfortunately, this assertion also fits hand-in-hand with the Department of Water Resources’ repeated attempts to suppress research results showing that improving Delta levees is the most cost effective way to protect the Delta for the future.”

Consulting Engineer Robert Pyke, an expert on Delta levees and the risk posed by earthquakes or other events, said further, “It is a ‘whopper’ to pretend that Delta levees are in imminent danger of collapse from earthquakes or other events. While there is some risk, it is relatively low. It is time to stop relying on the earthquake bogey to justify building the Peripheral Tunnels. The director of the U.S. Geological Service recently apologized for inflammatory comments about earthquake risk, and it is time for Dept. of Water Resources officials to follow suit.” Dr. Pyke, who has a Ph.D. in geotechnical and earthquake engineering from the University of California, has practiced in these fields for forty years, and is a co-author of the Delta Protection Commission’s Economic Sustainability Plan.

“The Delta levees can be further improved, and should be further improved, because a robust Delta levee system serves multiple goals, including improving water supply reliability,” said Dr. Pyke.  “The BDCP does little to nothing to restore a more natural flow regime through the Delta, and it makes no provision for dealing with a six-year drought.  What is most puzzling is that the governor continues to rely exclusively on the advice of Deputy Resources Secretary Jerry Meral, who shot the Governor in the foot by giving him bad advice on the old Peripheral Canal idea and who knows nothing about levees or some other elements of a comprehensive solution to California’s water problems.”

The Economic Sustainability Plan found that should a catastrophe were to occur in the Delta, 100% of the loss of life, and 80% of the economic loss would be shouldered by the people of the Delta region.  “The Governor is ignoring solid evidence of the best and most cost-effective methods to manage our water resources, to instead support a project that favors the largest corporate agribusiness growers of the West Side of the San Joaquin Valley,” said Barrigan-Parrilla.

Shoring up the Delta levees is a far more efficacious way to ensure water reliability for the state and preserve environmental and economic stability to the greater Delta—at a $2-4 billion cost, rather than the $20 billion or so estimated for the tunnel conveyance around the Delta.

The levees will need rehabilitation even were a Peripheral Canal or Tunnel built, as there is $20 Billion in infrastructure (railroads, gas lines, power facilities, highways), and 4 million people in the Delta that need protection.

For information about Restore the Delta, go to www.restorethedelta.org. 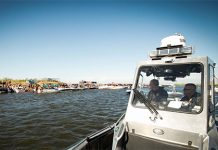 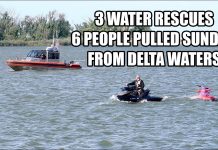