On Saturday, February 20, 2021, at about 8:51 PM, Antioch police officers, AMR medics and CON Fire personnel were shot at by a subject in a drive-by shooting. Two were hit and sustained non-life-threatening injuries. The suspect fled the scene and was pursued by numerous law enforcement agencies. The suspect was taken into custody in the City of Richmond. The suspect was later identified as 26-year-old Darryon Williams of Stockton. 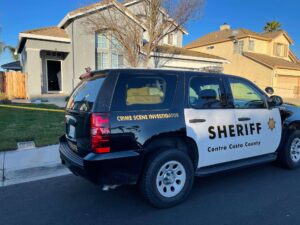 ter that evening, the Antioch Police Department requested Contra Costa Sheriff’s Deputies contact a person related to their case and conduct a welfare check at a residence on the 2100 block of Newport Court in Discovery Bay.

Delta Station Deputy Sheriffs arrived at the residence and found the door to the home open. Deputies conducted a protective sweep of the house and discovered a deceased individual inside with apparent gunshot wounds. The person was later identified as 64-year-old Michael Iliff of Discovery Bay.

Sheriff’s Office homicide detectives and crime lab personnel responded to the location. They were assisted by the Antioch Police Department, CHP and other agencies.

Investigators later identified Williams as the suspect in the murder of Iliff. After being interviewed by detectives, Williams was booked today at about 1 PM into the Martinez Detention Facility on the following charges: one count of murder and ten counts of attempted murder. He is being held in lieu of $11 million bail.

Sheriff’s Office detectives are trying to locate Williams’ four-year-old son and the mother of the child, 31-year-old Kimberly Meeks of Discovery Bay. She has links to the Stockton/Sacramento area. Detectives have concerns about their safety. They are traveling in a dark colored Audi SUV with California license plate – 8UKN742.

The investigation is ongoing. Anyone with information on this homicide or the whereabouts of Meeks and her son is asked to contact the Sheriff’s Office Investigation Division through Sheriff’s Office dispatch at (925) 646-2441 or at (925) 313-2600. For any tips, email: [email protected] or call (866) 846-3592 to leave an anonymous voice message.

At 8:52 pm Saturday, while on a medical call on Auto Center Drive in the City of Antioch, a Contra Costa County Firefighter and AMR medic were shot in a drive-by shooting.

The incident prompted the roadway to be shut down with both Antioch Police and Pittsburg Police responding to the call along with CHP and Contra Costa County Sheriff. The adult male suspect was later taken into custody in the City of Richmond after crashing into a parked vehicle (see more info below).

According to Contra Costa County Fire, A Con Fire firefighter and an AMR ambulance transport Alliance paramedic were caught in the crossfire of a drive-by shooting while responding to a serious medical emergency in Antioch Saturday night.

The Con Fire firefighter was shot in the foot and the AMR paramedic was shot in the leg. Both are in stable condition and being treated at hospitals for non-life-threatening injuries.

“Tonight’s senseless shootings are a vivid reminder of the very real dangers our first responders face, often side-by-side with our law enforcement partners, as they work to save lives across our communities,” said Lewis T. Broschard III, fire chief, Contra Costa County Fire Protection District. “We are grateful for the public outpouring of support for our wounded firefighter and AMR paramedic and for the work of law enforcement across the Bay Area to bring the perpetrator or perpetrators to justice.”

“As representatives of our firefighters, and in support of the police and EMS personnel we respond with on a daily basis, we are grateful to report both first responders injured in tonight’s shooting incident are expected to make full recoveries,” said Vince Wells, president, United Professional Firefighters of Contra Costa County. “I would like to thank the members of the community of Antioch and beyond for your words of concern and support regarding those injured in tonight’s incident. We expect to learn more as the investigation uncovers more details regarding this incident.”

The shooting is under investigation and no other information was released on scene.

Live Video from the incident is posted on our Facebook Page.

On 2/20/2021, at approximately 8:51PM, Antioch police officers were called to the 1900block of Auto Center Drive on the report of a citizen requiring emergency medical attention. A fire engine from Contra Costa County Consolidated Fire Protection District (Con Fire), and an ambulance from Contra Costa American Medical Response (AMR) also responded to the medical call.

While tending to the patient in the parking lot near Auto Center Drive, a suspect in a silver SUV drove by the team of first responders and began shooting at the group. Afterwards, the suspect turned around and drove past the group again firing a second series of shots. A Con Fire firefighter and an AMR medic were struck by gunfire. The firefighter and medic were transported to local area hospitals, and their injuries were determined to be non-life threatening.

An ambulance and a police car were also struck by gunfire.

Several Antioch officers gave chase onto Highway 4 as the suspect vehicle fled westbound towards the City of Pittsburg. The vehicle pursuit traveled through Contra Costa and Alameda Counties and ended in the City of Richmond after the suspect vehicle collided with a parked vehicle. The suspect attempted to flee from the scene of the collision, but he was quickly taken into custody by officers from Richmond PD and the California Highway Patrol. The Contra Costa County Office of the Sheriff Air Support Unit also provided critical assistance. A firearm was collected at the scene.

Antioch Police Department detectives with the Violent Crimes and Special Operations Units responded to the scene, along with crime scene investigators, and took over the investigation. The investigation is still active, and evidence is being collected and evaluated.

On Sunday, the Brentwood Police Department confirmed that a robbery that occurred at approximently 8:30 pm Saturday was in connection with the ongoing investigations in the City of Antioch and Town of Discovery Bay.

According to police, the robbery occurred at Quik Stop in Brentwood where the suspect, a black male in his 20s, displayed a firearm before demanding an undisclosed amount of cash. The suspect fled in a silver SUV with the cash and some store merchandise. Nobody was injured during this robbery.

Lieutenant Walter O’Grodnick confirmed the suspect in their robbery is connected to the ongoing investigations in Antioch and Discovery Bay.

No additional information is being released to preserve the integrity of this complex multi-agency investigation. More information from the Contra Costa County Sheriffs Office is expected to be released later Sunday regarding a fatality that is also connected to this incident.

You have to be aware of history to celebrate anything.