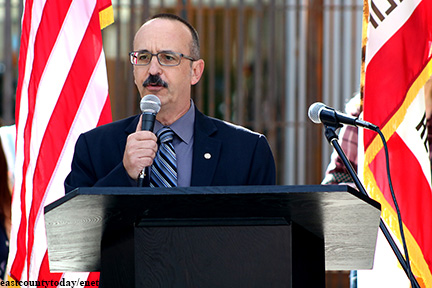 On Wednesday, Brentwood City Manager Gus Vina announced he has submitted a letter of retirement which will be effective at the end of December.

Vina retires at a time that will allow the current city council, who were voted in at-large, to select the next city manager ahead of District Elections. He also leaves the city as it works out its urban limit line process.

Here is the official press release from the City of Brentwood.

BRENTWOOD, CA – On July 9, 2019 City Manager Gus Vina submitted his retirement letter to the City Council. Mr. Vina’s retirement will be effective at the end of December 2019, completing his fifth year with the city.

Gus has dedicated a total of 39 years to public service and considers his five years with Brentwood as the pinnacle of his career. Gus wishes to thank the City Council for their leadership and support, and for having a great vision for the future of this wonderful city. Gus also thanks his great staff at the city whom are the reason why it is truly “Better in Brentwood” and whom without, nothing could have been accomplished.

Gus Vina stated that, “It has been an honor serving this Council, the organization, and this community. It is simply the right time for me to move on and I am humbled and grateful to end my career having served the great City of Brentwood.”