Antioch – Referring to a sign making party Facebook video post in preparation for a protest today in Antioch, Mayor Sean Wright expressed outrage over a sign highlighted in the video which says “I’m Sean Wright” and depicts people in Klan hoods wearing swastikas.

The post was made by Shagoofa Khan, member of the Richmond group Together We Stand and supporter of Wright’s opponent, Lamar Thorpe. In the video (see link below), Khan pans to the sign with the klan hoods and swastikas saying “Her’s is really nice.”

“I support all peaceful protest against all forms of racism, but blasting me with drawings of hooded klan members and swastikas is absolutely uncalled for,” said Wright, who is in the middle of his campaign for re-election as Antioch Mayor.

“This has gone way too far,” Wright added.

Khan is prominently featured in Thorpe’s campaign brochure entitled “Leadership that Listens” as one of the women leaders supporting his campaign. 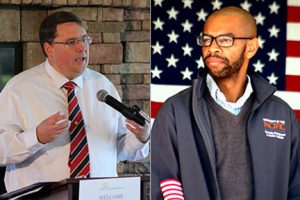 ight calls on Thorpe to IMMEDIATELY denounce Khan’s actions. “If my opponent is listening and promoting individuals who condone the use of klan garb and swastikas, that says a lot about his character.” Wright stated. “I am extremely concerned for the future of Antioch.”

Today’s protest march to Dismantle White Supremacy is scheduled to begin at 4 PM at City Park in Antioch (1050 A Street) with a march to the Antioch Police Department (300 L Street).

Editors Note: an email has been sent to Councilmember Lamar Thorpe asking if he would denounce the actions.