At around 2:12 am Wednesday, the East Contra Costa Fire Protection District responded to a report of a commercial structure fire in the 3900 block of Main Street in the City of Oakley.

Upon arrival, units located a building on fire with smoke and flames and requested a 2nd alarm response. The incident has closed down main street in both directions. This started as a tire fire that spread to the building and impacted several businesses. 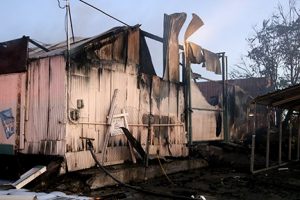 As of 4:39 am, firefighters were still battling the fire and the fire timer was still on.

During the fire attack, it was reported that several firefighters were behind the building when they began to hear a train approach and raced to get personnel and equipment away from the tracks. No one was injured and the Fire District confirmed a third time that the railroad tracks were shut down. 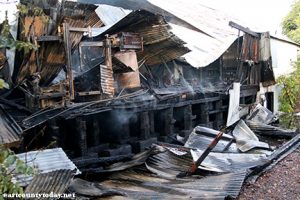 According to Battalion Chief Ross Macumber, they got reports by multiple people in the area that the building was on fire and arrived on scene to a well involved building with the tire shop engulfed in flames.

“We were able to keep the fire to the area of origin, but there is still some significant damage to an adjoining business,” said Macumber. “We suspect the fire started with the tires on the outside, however, the fire is still under investigation. At least one business was completely destroyed and a second one sustained significant damage.”